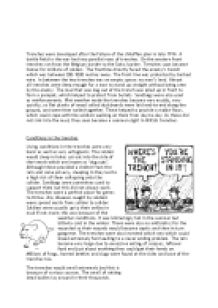 ﻿Trenches were developed after the failure of the shlieffen plan in late 1914. A battle field in the war had two parallel rows of trenches. On the western front trenches ran from the Belgium border to the Swiss border. Trenches soon became homes for millions of solders. The frontline directly faced the enemy?s trench which was between 200-1000 metres away. The front line was protected by barbed wire. In between the two trenches was an empty space: no man?s land. Almost all trenches were deep enough for a man to stand up straight without being seen by the enemy. The mud that was dug out of the trench was piled up in front to form a parapet, which helped to protect from bullets. Sandbags were also used as reinforcements. Wet weather made the trenches become very muddy, very quickly, so flat planks of wood called duckboards were laid end-to-end along the ground, and were then nailed together. ...read more.

Soldiers were usually up to their ankles in mud if not more; this was because of the weather conditions. It was blisteringly hot in the summer but bitterly cold in the winter. There were also no antibiotics for the wounded so their wounds would become septic and then in turn gangrene. The trenches were also invested which rats which could breed extremely fast leading to a never ending problem. The rats became very large due to excessive eating of corpses, leftover food and just about anything they could get their hands on. Millions of frogs, horned beetles and slugs were found at the sides and base of the trenches too. The trenches would smell extremely bad this is because of various sources. The smell of rotting dead bodies lay around in their thousands. Overflowing toilets would also give off an uninviting odour. ...read more.

These are just a few examples of diseases and conditions that were picked up whilst in the trenches, they condition were truly disgusting. Life in the trenches Life was very boring and lonely in the trenches. People dying around you all the time and thinking constantly you could be under attack. Causalities were horrific; this was not a pleasant think to watch. Shelling, gas attacks and the unbearable conditions led to breakdowns, initially soldiers were shot for refusal to obey order but later shell-shock was recognised. Men would take every opportunity to get some sleep or rest. After daily duties men would have some free time to do things such as reading or writing letters. In the event of battle, a whistle would be blown and men were ordered into no man?s land this is called going over the top. The front line at the beginning of a major battle suffered badly. In the battle of Somme 70% of the troops in the first wave were killed or badly wounded. ...read more.