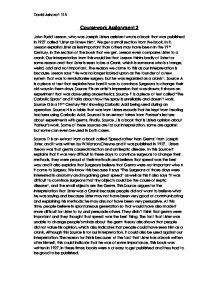 Coursework Assignment 2 John Rudd Leeson, who was Joseph Listers assistant wrote a book that was published in 1927 called 'Lister as I knew him'. We get a small section from the book, in it, Leeson explains Lister as less important than others may have been in the 19th Century. In the section of the book that we get, Leeson even compares Lister to a crank. Our interpretation from this would be that Leeson thinks badly of Lister for some reason and that Lister is seen to be a Crank, which is someone who is strange, weird, odd and not important. The reason we come to this as our interpretation is because Leeson says "He was no longer looked upon as the founder of a new system that was to revolutionise surgery, but he was regarded as a crank". Source A is a piece of text that explains how hard it was to convince Surgeons to change their old ways in them days. Source E is an artist's impression that was drawn; it shows an experiment that was done using anaesthetics. Source F is a piece of text called "The Carbolic Spray" and it talks about how the spray is unreliable and doesn't work. Source G is a 19th Century Print showing Carbolic Acid being used during an operation. Source H is a table that was from Listers records that he kept from treating fractures using Carbolic Acid. Source I is an extract taken from Pasteur's lecture about experiments with germs. Finally, Source J is a book that is Listers opinion about Pasteur's work. Some of these sources are for our interpretation, some are against, but some can even be used in both cases. Source D is an extract from a book called 'Speed rather than Germs' from Joseph Lister, and it was written by W.Watson.Cheyne and it was published in 1927. Listers theory was that germs caused infection and antiseptic disease. ...read more.

Source H is a Record of Lister when he was treating fractures using Carbolic Acid. It explains that from 1864 to 1866, before Carbolic Spray was introduces the fractures treated were 34, and from that 15 people died, and only 19 recovered. The table to results then explain that during 1867 and 1870, after the introduction of Carbolic Spray the number of fractures treated was 40, and from that 34 recovered and only 6 died. This shows that the death rate decreased dramatically after Carbolic Spray was introduced and therefore implies that it works well and does the job that it is intended to do. This Source argues against the interpretation that Lister was a Crank because the fact that the Death rate decreased dramatically after the introduction of the Carbolic Spray implies that Lister made something that worked well. Also, the fact that Lister kept a record of results gives the impression that he was an organised person who knew what he was doing which also went against the interpretation. The Source gives the impression that Lister was a very important person who gave a lot to medical care and surgery and that he was not a Crank, but someone who dramatically improved surgery with the Carbolic Spray. Source I is an extract of one of Pasteur's lectures given at a university of Parris in 1864 about how he discovered the germ theory. Pasteur was responsible for creating the germ theory and this source highlights one of his experiments. The Source explains that if you leave something for a small amount of time then it becomes mouldy, but if you heat it, then it removes any germs that may be present. He continues to explain that if you block off the air from coming into contact with the matter, then it will stay fresh and will not get mouldy for weeks, months, and even years! ...read more.

Because of all this I think all people rely on all other people to keep everything working, so I do not believe that Lister was any more of a crank than the others were. If aftercare was poor, then patience would also die, Florence Nightingale was a nurse who introduced many schools so that training nurses could get new training in the art of medicine, she also made it so that ward floors were cleaned, and that beds were spaced further apart to give people more room. Nightingale also made sure that all equipment and bedding was washed fully between patients to prevent the spread of infection. She made sure that wards had a lot of fresh air and that all rooms were clean at all times. She also changed the look as nurses, in the early 19th century nurses were seen as drunken prostitutes, and after Florence Nightingale that all changed! The things Florence did made the death rate from aftercare go down dramatically! The fact that Leeson came to the conclusion that Lister was a Crank could be down to many reasons, especially since he was Listers Assistant. He could have done this because they could have had an argument, just because they are colleagues doesn't mean they have to be friends. It could also be due to the fact that Leeson may have thought that he was more important that Lister and that he wasn't getting the credit that he should be getting, this could have caused him to feel professional jealousy. The other reason could also be due to the fact that Leeson actually believes that Lister was less important compared to other people; Leeson would spend a lot of time with him so he could have seen another side of him that would have been stranger making him see him as a crank. The other thing that could cause Leeson to say these things about Lister is the fact that the quote could have been written out of context. ?? ?? ?? ?? David Ashcroft 11B ...read more.