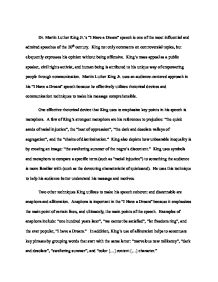 Dr. Martin Luther King Jr.'s "I Have a Dream" speech is one of the most influential and admired speeches of the 20th century. King not only comments on controversial topics, but eloquently expresses his opinion without being offensive. King's mass appeal as a public speaker, civil rights activist, and human being is attributed to his unique way of empowering people through communication. Martin Luther King Jr. uses an audience-centered approach in his "I Have a Dream" speech because he effectively utilizes rhetorical devices and communication techniques to make his message comprehensible. One effective rhetorical device that King uses to emphasize key points in his speech is metaphors. A few of King's strongest metaphors are his references to prejudice: "the quick sands of racial injustice", the "heat of oppression", "the dark and desolate valleys of segregation", and the "chains of discrimination." ...read more.

Examples of anaphora include: "one hundred years later", "we cannot be satisfied", "let freedom ring", and the ever popular, "I have a Dream." In addition, King's use of alliteration helps to accentuate key phrases by grouping words that start with the same letter: "marvelous new militancy", "dark and desolate", "sweltering summer", and "color [...] content [...] character." Another way King keeps his audience and their goals in mind is by encouraging them to embrace the future. For instance, King motivates his people to take action by saying: "1963 is not an end, but a beginning." King further emphasizes the need for proactivity as he repeatedly says, "Now is the time." Lastly, being a man of nonviolence, King wants to make sure that his audience does not misinterpret the message of his speech, so he says: "We must not satisfy our thirst for freedom by drinking from the cup of hatred." ...read more.

King's allusions to past events help to create common ground for both the black man and white man because both colors experienced American history in some form or another. Martin Luther King's "I Have a Dream" speech deserves all of the recognition it gets because of the relevance and solidity of the content and potent stage presence of the speaker. King not only knows how to communicate his information to an audience of African Americans, but can also accommodate an audience on a broader level. His use of rhetorical devices gives emotion to an already meaningful speech. It is obvious King uses an audience-centered approach to "I Have a Dream" because of the ways he makes the material easy to understand and captivating to see and hear. ...read more.