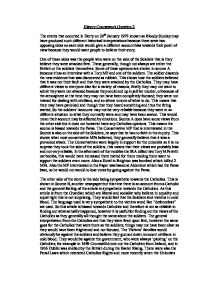 History Coursework Question 2 The events that occurred in Derry on 30th January 1972 known as Bloody Sunday may have produced such different historical interpretations because there were two opposing sides so each side would give a different account bias towards their point of view because they would want people to believe their story. One of these sides was the people who were on the side of the Soldiers that is they believe they were attacked first. These generally, though not always are either the British or the soldiers themselves. Some of these opinions are shown in source A because it has an interview with a Tory MP and one of the soldiers. The soldier discards the new evidence that was discovered as rubbish. This shows how the soldiers believed that it was not their fault and that they were attacked by the Catholics. They may have different views to everyone else for a variety of reasons, firstly they may not want to admit they were not attacked because they could end up in jail for murder, or because of the atmosphere at the time they may not have been completely focused; they were not trained for dealing with civilians, and so where unsure of what to do. ...read more.

As this article is from the Guardian which are liberal and socialist who believe in equality and equal right this is not surprising. They would feel that the Soldiers shot victims in cold blood. The language used is very sympathetic to the victims word like "defenceless" are used. So this article is biased towards Catholics and therefore is not as reliable in finding out what actually happened, however it is useful for finding out the views of the Catholics as they generally all thought the same about the soldiers. The general interpretation from the Catholics are that they were fired upon first, however the same goes for the Catholics that were there as the soldiers; things may not have been clear as they would have been frightened and not focused. The Victims' families would obviously be against the soldiers and believe they gunned down innocent civilians in cold blood. They would be against the government, who were always 'picking' on the Catholics; for example in 1649 Cromwell drove out the Catholics from Ireland, and in 1916 Dublin was shelled by the British during the Easter Rising. ...read more.

Also they may have felt angry because they would say it was typical for the Catholics to be targeted, for example the execution of the Irish Republicans or the events of the Easter Rising. This would affect there views towards the Army and maybe even make them more extreme than other people. Source C is unclear to determine whether or not it is biased because we are not told the witness' background, so they could be Catholic and trying to blame it on the soldiers. It is sympathetic towards the victims and says the attacks were pre-meditated. The Sources A-D show that the events that occurred in Derry on 30 January 1972 produced different historical interpretations generally because of different evidence. There is as of yet not enough sufficient evidence to claim that either party is guilty. So this means both parties stick to their instinct that they're right. The two different interpretations are influenced by a variety of things, mainly emotions and previous historical events which indicate this kind of thing has happened before and so it is likely that the soldiers are to blame. ...read more.