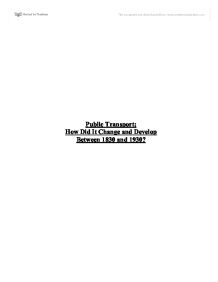 Public Transport: How Did It Change and Develop Between 1830 and 1930? I have chosen the topic of how public transport changed and improved, as this is a wide topic spanning two centuries, I shall limit mine from 1830 at the birth of the train's expedition between Manchester and Liverpool, to 1930, just before World War Two. I have chosen this topic mainly because of London's Tube; I have been interested in the underground for quite a while and I thought it would be interesting to see the Tube's predecessors and how the underground was created. Also, it is an invention that affected a lot of people- nowadays people can get from south England to north England in a matter of hours; unthought-of in the time of horse and carriage, as then it would take days. [1] It's the big day in 1830; millions of people have arrived to see the new locomotive in action, bursting to see if it shall succeed or fail. "A whopping speed of 35 miles an hour! Can you imagine?" one woman exclaims as the crowd thickens. This train is to travel from Manchester to Liverpool- both leading cities in the Industrial Revolution. ...read more.

Trams, however, are much older. The first tram was invented and used in Harlem, 1832. This was a horse-driven tram. Werner Von Siemens designed an ergonomical overhead wire system, which transferred electricity to power the tram using an 'arm', which could be stacked down when not in use. This 'arm' is still used in trams, trains and trolley buses today. [6]Another form of inner-city travel were omnibuses: horse-drawn carriages that performed the same services as a modern-day bus. In 1898 the first motorbus was used, [2][5]The biggest of all public transport up until 1930, however, has to be the boat. Isambard Kingdom Brunel built the first truly economical vessel, the SS Great Western. With a capacity of 148 people, it made its maiden voyage in 1838, transporting people to New York- a journey that took just 15 days. This feat set the scene for more boats to be built- it was proven in this voyage that steamboats can be economical, and could cover the Atlantic. The next development in boats was steam turbines- first seen in the boat Turbinia. I used a few sources for my narrative; it was hard to find internet sources which weren't Wikipedia- which I tried to avoid- so I used some books instead. ...read more.

Using trains people can travel all through Europe, from China to Russia. Metros in Moscow parry millions of people every day, all due to their great efficiency and ease of use. And this is all because of the developers and engineers of the 19th-20th century. Overall, I can honestly say that there is much more to public transport than I had initially thought: much more than just the London Tube, there are so many allies to go down. Had I chosen a wider time range it could've included the more modern London Buses, Bullet Trains, Zeppelins and Planes. The developments in the century I chose were the stepping-stones for the entire future of public transport. The finding of sources was the hardest part of this project- finding internet sites that were entirely related was near impossible, so I had to rely on the information I got from books. Next time I might see how much information I can get on a project before doing it- this one was ok because each of the books had its own valuable information and lots of it. Another hard part was planning my time wisely so I didn't do it all at the last minute, and I gradually built up my project step by step. Next time I would actually draw up a plan for how I should build it up. ...read more.