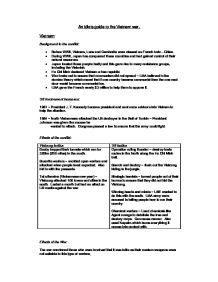 Revision notes on the Vietnam war.

An idiots guide to the Vietnam war. Vietnam: Background to the conflict: * Before WWII, Vietnam, Laos and Cambodia were classed as French Indo - China. * During WWII, Japan has conquered these countries and had gained control of their natural resources. * Japan treated these people badly and this gave rise to many resistance groups, including the Vietminh. * Ho Chi Minh declared Vietnam a free republic. * War broke out to ensure that communism did not spread ~ USA believed in the domino theory which meant that if one country became communist then the one next door would become communist too. * USA gave the French nearly $3 million to help them to oppose it. ...read more.

in the south. Guerrilla warfare ~ avoided open warfare and attacked when people least expected. Also hid in with the peasants. Tet offensive (Vietnamese new year) ~ Vietcong attacked 100 towns and cities in the south. Lasted a month but had an effect on US media against the war. Operation rolling thunder ~ destroy trade routes in the North along the Ho Chi Minh trail. Search and destroy ~ flush out the Vietcong hiding in the jungle. Strategic hamlets ~ turned people out of their homes to ensure that they did not hid the Vietcong. Winning hearts and minds ~ USE wanted to do this with the south. ...read more.

Johnson lost popularity. Domino theory was proved wrong. War played part in ending Cold War. Powers involved came to idea of D�tente. Social 2 million people killed. Millions injured by bombs. Traps left in Vietnam. Still suffering effects of chemical warfare. USA troops found it difficult to readjust. Economic US cost $120 billion for the war ~ limited spending at home. Vietnam became totally communist. Unable to feed selves. Resolving the conflict: Method How well did it work? Force Initially seen as a way to end it all, but it did nothing but continue the fighting. Deterrent Nuclear weapons could have been used but it would have resulted in less chance of winning. protest Peace movements with its anti war message helped to end the conflict/ International cooperation. ...read more.