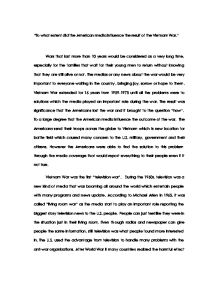 "To what extent did the American media influence the result of the Vietnam War." Wars that last more than 10 years would be considered as a very long time, especially for the families that wait for their young men to return without knowing that they are still alive or not. The medias or any news about the war would be very important to everyone waiting in the country, bringing joy, sorrow or hope to them. Vietnam War extended for 16 years from 1959-1975 until all the problems were to solutions which the media played an important role during the war. The result was significance that the Americans lost the war and it brought to the question "how". To a large degree that the American media influence the outcome of the war. The Americans send their troops across the globe to Vietnam which is new location for battle field which caused many concern to the U.S. military, government and their citizens. However the Americans were able to find the solution to this problem through the media coverage that would report everything to their people even if it not true. Vietnam War was the first "television war". During the 1960s, television was a new kind of media that was booming all around the world which entertain people with many programs and news update. ...read more.

Films and photographs of people dying, bombed schools and hospitals made people think they made no good in helping South Vietnam. The DRV device was one of the technologies which kept the US media informed. It was first used in World War II with the ability to count the number of death in wartime. The DRV was very effective to the anti-war movement in US and the rest of the world. Pictures had a huge impact to US. One famous picture which illustrates 9-year-old girl Kim Phuc escaping US attack which is bombing her village. She was partially burned and the boy next to her is her brother who lost an eye from the attack. This picture was very significance to many anti-war movements. Not only the scene of children suffering was point out, but from the information that the kids were South Vietnamese made the Americans reputation looked worst. The truth that this picture reveals was that the kids were attacked by their own side. Even though US President Nixon tried to dismiss it as a fake, but the situation was proved by the British television news team. This brought the US down to a certain level from the point that they were attacking the people who they were supposed to protect. ...read more.

The causalities difference was a big deal for both wars. World War I had modern technologies such as machine guns and artillery, but they still used old tactics such as infantry charge which resulted in stalemate and great slaughter. "Should I have resigned rather than agree to this slaughter of brave men at the Battle of Somme?" (David Lloyd George). However, the developing of technology made World War II caused more causalities. Submarines and tanks became larger, faster and more powerful. Naval ships also became larger and more powerful, and the introduction of the aircraft carrier may have been the most important development of the war. The most destructive weapon that was introduced was the atomic b**b. During World War II, over 60 millions people had died, including 20 millions soldiers and 40 millions civilians. The Second World War was more of a total war than the first, many civilians were killed. Many civilians died because of disease, starvation, massacres, bombing and deliberate genocide. Not only the difference in causalities was from the developed technologies, but there were both wars going on in Europe and in the Pacific. While both world wars involved many of the same combatants there were many more differences than similarities. The First World War set the stage for the Second World War. The most important difference between the world wars was their long term impact. ...read more.