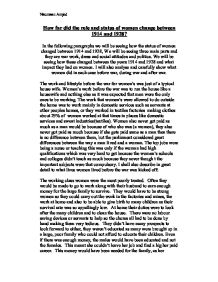 How far did the role and status of women change between 1914 and 1928? In the following paragraphs we will be seeing how the status of women changed between 1914 and 1928, We will be seeing three main parts and they are war work, dress and social attitudes and politics. We will be seeing how these changed between the years 1914 and 1928 and what impact they had on women. I will also analyse and carefully show what women did in each case before war, during war and after war. The work and lifestyle before the war for women's was just of a typical house wife. Women's work before the war was to run the house like a housewife and nothing else as it was expected that men were the only ones to be working. The work that women's were allowed to do outside the home was to work mainly in domestic services such as servants at other peoples homes, or they worked in textiles factories making clothes about 29% of women worked at that times in places like domestic services and sweat industries(textiles). Women also never got paid as much as a man would be because of who she was (a women), they also never got paid as much because if she gets paid same as a man then there is no difference between them, but the parliament considered great differences between the way a man lived and a woman. The top jobs were being a nurse or teaching this was only if the woman had high qualifications which was very hard to get because the women's schools and colleges didn't teach as much because they never thought the important subjects were that compulsory. ...read more.

They all expected total devotion, they could commit adultery against their wives but if she were to against him then she would often be divorced immediately and as she had no rights would be left with nothing, not even the rights to the children. They would also look for total obedience, their wives should never answer back in public, they might be able to at home but never in public as this could embarrass him in front of his peers. Generally women were treated as second-class citizens. Before the war there was no social life for women as you can see above. Women were just housewives or servants and their clothing was conservative. They normally wore ankle length skirts and long dresses. They couldn't go out alone had to be with a chaperone. They weren't allowed or given the right to divorce their husbands only he had the right to divorce the wife, the wife had to have very good reason with a lot of proof to divorce the husband which only few could do. The males needed basic reason such as cheating the man and he wouldn't need much proof because the law never allowed women to divorce men. Women were expected to act like ladies and not do men like activities such as drinking and smoking. Women became the heart of the war by working hard and helping men out at war but because they were independent now they could go out alone and they started to drink and smoke. ...read more.

The Government could not ignore the work women did on the home front because if not for the women's the country would have suffered tremendously, and they deserved to have the right to vote and many other rights. It showed they were just as important as men in society. Women would have probably gained the vote eventually but it would have taken longer so therefore the war acted as a catalyst for the women's. This was the main reason for the attitude change towards women and their right to vote in 1918, but there were other long-term reasons that gradually brought about this change before 1914. There had been improvements to women's status and role in society, and they were beginning to not be looked on as something more than second-class citizens. There were improvements in the 19th century to women's career opportunities, education and matrimonial rights. Also, the work of the Suffragists and Suffragettes kept the issue in the public eye and raised awareness. This helped women to get the rights sooner. After looking at all this you can see how equal to men women have become after the war. There were some rights given which no longer made as much difference between the men and women Mainly this was a reward for all the work and capability women's had shown during war. So women had achieved their goal of working hard during war and showing that they are no less than men and as a form of reward they received many rights after the war. By Naumaan Amjed Naumaan Amjed ...read more.