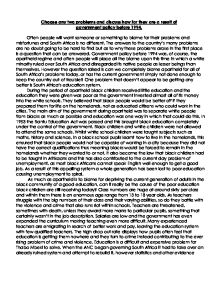 Choose any two problems and discuss how far they are a result of government policy before 1994.

Often people will want someone or something to blame for their problems and misfortunes and South Africa is no different. The answers to the country’s many problems are no doubt going to be hard to find but as to why these problems arose in the first place is a question that can be answered. Government policy before 1994 was, of course, the apartheid regime and often people will place all the blame upon this time in which a white minority ruled over South Africa and disregarded its native people as lesser beings than themselves. However the question raised is can we completely blame apartheid for all of South Africa’s problems today, or has the current government simply not done enough to keep the country out of trouble? One problem that doesn’t appear to be getting any better is South Africa’s education system.

During the period of apartheid black children received little education and the education they were given was poor as the government invested almost all of its money into the white schools. They believed that black people would be better off if they prepared them for life on the homelands, not as educated citizens who could work in the cities. The main aim of the government during apartheid was to separate white people from blacks as much as possible and education was one way in which that could do this. In 1953 the Bantu Education Act was passed and this brought black education completely under the control of the government. Black children and white children were not allowed to attend the same schools. Whilst white school children were taught subjects such as maths, history and science, in a black school pupils learnt how to live in the homelands, this ensured that black people would not be capable of working in a city because they did not have the correct qualifications thus meaning blacks would be forced to remain in the homelands whether they wanted to or not. It also became the law that black children had to be taught in Afrikaans and this has also contributed to the current day problem of unemployment, as most black Africans cannot speak English well enough to get a good job. As a result of this appalling system a whole generation has been lost to poor education causing unemployment to spiral.

As much as apartheid is to blame for depriving the current generation of adults in the black community of a good education, can it really be the cause of the poor education black children are still receiving today? Class numbers are huge at around sixty per class and within them there is an enormous age range from 13 to 18 year olds. As teachers struggle with the big numbers of their class and their varying abilities, so do they battle with the violence and crime that also runs riot within schools. Teachers are threatened, sometimes with death, unless they award more marks to particular pupils, something that certainly wasn’t in the job description. Salaries are low and the government has even expanded the curriculum making teaching even more difficult. Many experienced teachers are emigrating in search of better work and pay, leaving the education system with few qualified teachers. The high drop out rate displays how pupils often feel that education is getting them nowhere and they turn to crime instead contributing to the ever rising problem of crime and violence. Education is a difficult and expensive problem for Thabo Mbeki to solve. When the ANC began governing South Africa it had to take over an already ruined system and attempt to rebuild it, however statistics and other evidence suggests that not a lot has been achieved by the ANC in improving the education of their future workforce. This is unlikely to help many of South Africa’s other problems as education appears to have a very strong knock on effect upon other issues, such as housing and unemployment.

Sadly 2.4 million families are still living in the shanty towns on the outskirts of the cities in South Africa after having been promised new houses when the ANC came into power. These huge townships are a result of apartheid policy, which gradually, through a number of laws, forced black people off their land and caused them to begin a life of poverty outside of the prosperous cities. The 1913 Land Act during apartheid forbid black people from owning or share cropping on any land and basically turned black farmers into black farm labourers. The Group Areas Act of 1950 meant that the government could move blacks off land as they wished and eventually all of the black population was moved into the homelands. However the homelands were only 13% of the whole of South Africa and this simply couldn’t sustain the numbers of black people (who made up 70% of the population) so they went in search of work in the cities. As they were not allowed to live in the cities, townships sprang up on the outskirts in which the black workers would live and rapidly they grew in size as more and more people came for work in the cities. Poverty was extremely high in these shanty towns. There was little or no clean water, sanitation was very poor and the electricity that was there was a result of sabotaging metres in order to get it freely. Unfortunately this mentality of non-payment has continued in South Africa and the government looses millions of pounds worth of electricity due to people stealing it. In the elections of 1994 the government promised people new homes in which people could live instead of the makeshift leaky shacks that millions lived in, however they are still promising that today, regrettably still to millions of people.

Reports on the appalling state of the shanty towns are often given shown today. 8 million people still live without access to clean water and the poor sanitation allows disease to run riot. People are beginning to get fed up with the government’s endless promises of a new home as many of them have been on the waiting list for years for one of the government’s houses. The corrupt system has allowed those high up in politics receive homes first and then their friends, regardless of where they are on the waiting list. It is accepted by many people that if you know nobody of any particular stature then it is unlikely you will be moving out of your shack. Unfortunately housing is another expensive problem for the government to solve, it has built new homes but simply nowhere near the number needed. It is true to say that it has also provided many townships with clean water but again there are still so many without the basic sanitation. Momentum for the campaign trying to eliminate the housing problem appears to be running out, it seems that the government thinks they have done all they can or believe that housing is too big a problem to be taking on. Which ever is true millions still live in dire poverty in the dangerous shanty towns and as the population grows the problem certainly isn’t becoming any better.

There is no doubt that the period of apartheid created many difficult problems for South Africa, particularly social ones. The disregard for black people left millions in poverty and the policies ensured that no black person would be able to have a better life than a white. Education was deliberately made poor to ensure that black people could not get good jobs and the way in which they lived was of little concern to the white government, as long as they did not live alongside the white population. However the government today seems to struggling greatly with the problems facing South Africa. Its lack of money and the sheer scale of the problems mean that solving them becomes an even greater challenge. On the other hand I do believe that the government could have done more to help the situations. Very little appears to have been achieved within education and it means that another generation may be lost unless something is done soon. Corruption is also a another huge downfall of the current government, perhaps if things were more organised then a housing system could begin to be put into place. I believe that it depends heavily upon which problem you are addressing as to how far you can blame government policy before 1994. Both education and housing became big problems for black people due to the apartheid laws and because they are so huge the ANC has found it difficult to combat them. If apartheid had never happened I believe that education and housing would not be such an issue today. Without apartheid black people never would have been forced into poor housing and a bad education system and the ANC would not have had to solve these spiralling problems.