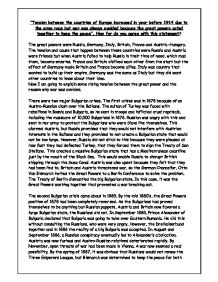 &quot;Tension between the countries of Europe increased in year before 1914 due to the arms race but war was always avoided because the great powers acted together to keep the peace&quot;. How far do you agree with this statement?

"Tension between the countries of Europe increased in year before 1914 due to the arms race but war was always avoided because the great powers acted together to keep the peace". How far do you agree with this statement? The great powers were Russia, Germany, Italy, Britain, France and Austria-Hungary. The tension and cause that happen between these countries were Russia and Austria were friends but when Austria failed to help Russia in their time of need, which mad them, become emeries. France and Britain disliked each other from the start but the effect of Germany made Britain and France become allies. Italy was country that wanted to build up their empire, Germany was the same as Italy but they did want other countries to know about their idea. Now I am going to explain some rising tension between the great power and the reason why war was avoided. There were two major Bulgarian crises. The first crises was in 1878 because of an Austro-Russian clash over the Balkans. The sultan of Turkey was faced with rebellions in Bosnia and Bulgaria, so he sent in troops and inflicted cruel reprisals, including the massacre of 10,000 Bulgarians in 1876. Russian was angry with this and sent in her army to protect the Bulgarians who were Slavs like themselves. This alarmed Austria, but Russia promised that they would not interfere with Austrian interests in the Balkans and they promised to not create a Bulgarian state that would not be too large. However, Russia did not stick to this because they were pleased at how fast they had defeated Turkey, that they forced them to sign the Treaty of San Stefano. This created a massive Bulgarian state that has a Mediterranean coastline just by the mouth of the Black Sea. This would enable Russia to disrupt British shipping through the Suez Canal. Austria was also upset because they felt that they had been lied to. ...read more.

The two main countries Britain feared in this respect were France and Russia. This tension mounted in the Crimean War in the 1850's as Britain wanted to stop Russia's expansion into the Eastern Mediterranean where they could interfere with British trade in India. Russia lost the Crimean War, and so had reason to dislike and distrust Britain. This resulted in Russian alliance with Germany, in the Dreikaiserbund and the Reinsurance Treaty. Britain felt that Russian interference in Asia was a deliberate attempt to threaten British control in India, and therefore they were encouraged to sign the Mediterranean Agreements, 1887. The Agreements stated that Britain would help restrain French and Russian naval activity in the Mediterranean. Therefore Anglo-Russian antagonism did not directly lead to war but it was clear that the tension in Europe was increasing. The Anglo - French colonial rivalry: Fashoda created tension between Britain and France as they both were determined to expand their empire by taking over the Suez Canal in Egypt which they both desired to possess. France were determined to dominate North Africa and especially Egypt as they had built and paid for the Suez Canal so they could trade with Asia, they would not leave Egypt even though they were pressured by the French. The French attempted to force Britain out of Egypt by seizing the headwaters of the River Nile at Fashoda; the British were prepared to go to war with France so they can obtain the Suez Canal however the French were forced to back down, at this point Anglo - French relations were very low. This incident had caused great tension between the two countries and both of them could not trust each other, as Germany was uninterested in gaining foreign colonies so they was not a threat to Britain. Britain had agreed with Italy and Austria to restrain French and Russian naval activity, they had a signed a treaty called the Mediterranean Agreements. ...read more.

Britain's great power and the pride that they had for the navy which, due to the 'two power standard' was equal to the size of the combination of the two largest navies in Europe. It was important that Britain had such a large navy because water and a key for attacking nations surrounded it. Kaiser Wilhelm II came into power in 1898, after the dismissal of Bismarck. Wilhelm was quick to industrialize but still feared a evolution breaking out in Germany, to eliminate his insecurity he increased his armed forces and hoped to gain an empire, similar to the actions taken by Mussolini in 1922. Tension was created between mainly, Britain and Germany due to the arms race, the policy of Weltpolitik unsettled Britain as the naval chief of Germany, Von Tirpitz, drew up a naval plan. Before 1905, Tirpitz proposed 17 new battleships; this was later increased to 38 battleships as a result of the 2nd naval plan. Greater tension was caused for Anglo-German relations. The Tirpitz Plan wanted to challenge Britain's navy, the policy of Weltpolitik created this, but his 2nd stage was known as the danger zone and he wanted to allay British fears, but also to make Britain think twice about challenging her in the sea. The final stage was the 'risk theory', Germany believed that Britain wouldn't want to risk her forces against Germany incase they were damaged. The naval race ended in December 1912 after Germany feared war with France and Russia and no longer wanted to neglect her army. War was avoided but not because the great powers got together and sorted it out, it was avoided because Wilhelm had back out of the naval race and Weltpolitik all together and concentrate on building a continental army. In conclusion their were many event that could have made war break out but their was always Bismarck their to stop but when he was dismissed the kasier got involved their was no way the war could have been stop. ...read more.