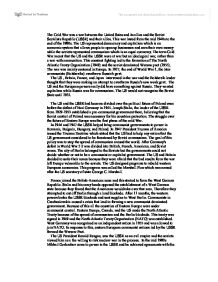 The Cold War was a war between the United Sates and its allies and the Soviet Socialists Republic (USSR) and their allies. This war lasted from the mid 1940s to the end of the 1980s.

The Cold War was a war between the United Sates and its allies and the Soviet Socialists Republic (USSR) and their allies. This war lasted from the mid 1940s to the end of the 1980s. The US represented democracy and capitalism which is an economic system that allows people to open up businesses and earn their own money while the soviets represented communism which is an equal economy. The term Cold War meant that the US and the USSR were at war but an ideological war, rather than a war with ammunition. This constant fighting led to the formation of The North Atlantic Treaty Organization (1949) and the soviet dominated Warsaw pact (1955). The war was mainly centered in Europe. In 1917, the end of World War 1, the later communists (Bolsheviks) ...read more.

In 1947 President Truman of America issued the Truman Doctrine which stated that the US had to help any nation that the US government considered to be threatened by Soviet communism. The goal of this policy was to stop the spread of communism around the world. After Germany's defeat in World War 2 it was divided into British, French, American, and Soviet zones. The city of Berlin belonged to the Soviets but the governments could not decide whether or not to be a communist or capitalist government. The US and Britain decided to unite their zones because they were afraid that the bad results from the war left Europe vulnerable to the soviets. The US designed programs to rebuild western European economies. This program was called the Marshall Plan which was named after the US secretary of state George C. ...read more.

In response to this, eastern European communist nations led by the USSR formed the Warsaw Pact. The US President Ronald Reagan, saw the USSR as an evil empire and the soviets viewed him as a foe willing to risk nuclear war in the process. In the mid 1980s Mikhail Gorbachev came to power in the USSR and he achieved agreements with the west. In 1987, Gorbachev and Reagan agreed to eliminate a whole class of their countries nuclear missiles. In 1989, communists began to fall in the countries of Eastern Europe and the wall that divided east and West Germany since 1961 was torn down. In 1991, the USSR was eliminated and Russia and other Soviet republics became independent states. The end of Soviet power and the USSR itself was the end of the Cold War period. The ideology that once started the Cold War was now over and the American's defeated communism with capitalism. ...read more.