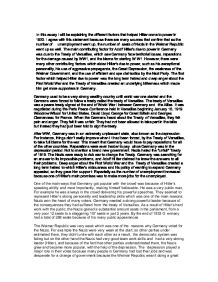 The factors behind Hitler's Rise To Power

In this essay I will be explaining the different factors that helped Hitler come to power in 1933. I agree with this statement because there are many sources that confirm that as the number of unemployment went up, the number of seats of Nazis in the Weimar Republic went up as well. The main contributing factor for Adolf Hitler's rise to power in Germany was due to the Treaty of Versailles, which saw Germany face territorial losses, reparations for the damage caused by WW1, and the blame for starting WW1. However, there were many other contributing factors which aided Hitler's rise to power, such as his exceptional personality, his use of aggressive propaganda, the Great Depression, the weakness of the Weimar Government, and the use of efficient and special tactics by the Nazi Party. The first factor which helped Hitler rise to power was the long term hatred and deep anger about the First World War and the Treaty of Versailles created an underlying bitterness which made him get more supporters in Germany. Germany used to be a very strong wealthy country until world war one started and the Germans were forced to follow a treaty called the treaty of Versailles. ...read more.

At the same time their private army of young people and thugs fought with their rivals and spread fear in the streets. Technology had a major role in Hitler's quest for being the Fuhrer of Germany. With the radio and TV being very popular items in the house, Hitler's message was more likely to be heard both inside and out side in marches and parades which Hitler would appear in which would increase his chances of getting votes. Nazis did not have any importance in the Reichstag, it seemed only perfect to Hitler that the presidential elections were coming up. So he focused all of his attention on campaigning for the 1932 elections. Hitler's political stands on current issues involving Germany were extremely strong. He promised to get revenge on Great Britain and France, and he wanted to make Germany the great nation it once had been. When the elections came around, it was Hitler against Hindenburg, another WWI expert. Hindenburg was counting on the support from business owners and from the respect he had earned in the war. With that support he came out of the elections as president. ...read more.

Also other parties fought among themselves while the Nazis were too busy trying to gain more supporters. Now that everything was coming together for his supreme rule over Germany, there still remained some obstacles. These were dealt with in each of their respected ways. The chancellor prior to Hitler, Von Schechter, was assassinated along with the leader of the garrison in Munich. This left only one obstruction in Hitler's path, President Hindenburg. Since he was nearing his own end, Hitler decided to just wait until he died. Once Hindenburg passed away, the gateway to dictatorship appeared, and Hitler was about to unlock it. Hitler could not just assume presidency, but he knew with his popularity and support with the public, that he could win an election. Hitler determined that a plebiscite (a vote of yes or no to resolve a situation) was to be called to clear the vacancy of president. With the vote going how Hitler had expected (basically he won the election), he assumed absolute power titled himself Fuhrer. Since Hitler had no powerful opposition, he reinforced that fact by banning all other parties, making Germany a one-party system. This was the final step in completing his pursuit of dictatorship, and it had been accomplished. Hitler was now the ruler, or Fuhrer of Germany. ...read more.