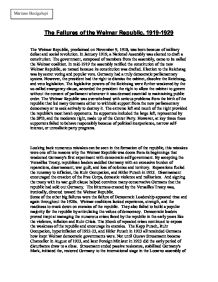 The Failures of the Weimar Republic, 1919-1929 The Weimar Republic, proclaimed on November 9, 1918, was born because of military defeat and social revolution. In January 1919, a National Assembly was elected to draft a constitution. The government, composed of members from the assembly, came to be called the Weimar coalition. In mid-1919 the assembly ratified the constitution of the new Weimar Republic, so named because its constitution was drafted. Election to the Reichstag was by secret voting and popular vote. Germany had a truly democratic parliamentary system. However, the president had the right to dismiss the cabinet, dissolve the Reichstag, and veto legislation. The legislative powers of the Reichstag were further weakened by the so-called emergency clause, accorded the president the right to allow the cabinet to govern without the consent of parliament whenever it was deemed essential to maintaining public order. The Weimar Republic was overwhelmed with serious problems from the birth of the republic that led many Germans either to withhold support from the new parliamentary democracy or to seek actively to destroy it. ...read more.

Stresemann ended passive resistance, stabilized Germany's Mark, initiated the, restored Germany to the international stage in the Locarno assembly of 1925), and brought Germany into the League of Nations in 1926. This introduced a period of stability and prosperity that lasted until the outbreak of the Great Depression in 1929. But even after political stability and economic prosperity had returned, Germany still faced serious problems. One problem was the radicalization of the middle classes in the wake of inflation of 1922 and Depression. Inflation cost middle-class Germans much of their life savings, something they never forgave the government for alluding this to happen and they especially never forgot this. After that, many turned to parties on the right or on the left that promised some sort of compensation or relief. The economic disaster of inflation pushed moderate, middle-class Germans toward the political extremes, mostly on the right. Political parties supporting the Weimar Republic and opposing the nationalist right were badly divided. Most of the other political parties thought of the Nazi as a weak party that would not cause any danger. ...read more.

But this could not hide the growth of structural and political crisis facing Weimar Germany. The disintegration of the middle classes as reflected in the decline of the liberal parties. The weakening of the political left seen in bitter battles that happened inside of the party. Also in the declining trade union strength. The crisis of the political system visible in the ever-changing coalition governments. And the rising anti-democratic sentiment reflected in the growth of radical parties on the right. If Gustav Stresemann would have lived for a longer time there could have been some hope for the Weimar Republic but he died. Gustav Stresemann was very lucky because he got to power in a period were the howl of Europe was economically recovering, making his job easier and most of the radical parties were dormant but not dead. When Gustav Stresemann died and the depression hit Germany again most of the middle class lost everything that they have save and the Germans started to look again to the extreme parties in hope of recovering what they have lost and to get ride of the party that in their eyes was a total failure. These developments did not guarantee the collapse of the Weimar Republic and rise of the Nazis, but they did make Germany's future uncertain. ...read more.