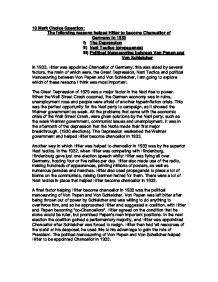 10 Mark Choice Question: The following reasons helped Hitler to become Chancellor of Germany in 1933 i) The Depression ii) Nazi Tactics (propaganda) iii) Political Manoeuvring between Von Papen and Von Schleicher In 1933, Hitler was appointed Chancellor of Germany, this was aided by several factors, the main of which were, the Great Depression, Nazi Tactics and political Manoeuvring between Von Papen and Von Schleicher, I am going to explore which of these reasons I think was most important. The Great Depression of 1929 was a major factor in the Nazi rise to power. When the Wall Street Crash occurred, the German economy was in ruins, unemployment rose and people were afraid of another hyperinflation crisis. ...read more.

The Depression weakened the Weimar government and helped Hitler become chancellor in 1933. Another way in which Hitler was helped to chancellor in 1933 was by the superior Nazi tactics. In the 1932, when Hitler was competing with Hindenburg, Hindenburg gave just one election speech whilst Hitler was flying all over Germany, hosting four or five rallies per day. Hitler also made use of the radio, making hundreds of appearances, printing millions of posters, as well as numerous parades and marches. Hitler also used propaganda to place a lot of blame on the communists, raising German hatred for them. There were a lot of Nazi tactics in place that helped Hitler become chancellor in 1933. ...read more.

Hitler then had 'all resources of the state' at his desposal, he used this to his advantage to gain the role of President. The political manoeuvring of Von Papen and Von Scheilcher helped Hitler to be appointed Chancellor in 1933. I don't think any one of the reasons was more important, as without each one of them, I don't believe Hitler's campaign would have been nearly as effective. If the depression hadn't occurred then Hitler wouldn't have had as much scope to insult the Weimar government, and make promises to the public. Without the Nazi tactics, the German public would not have been so absorped by the Nazi party, and overwhelmed with pro-Nazi media. It was the political manoeuvring of Papen and Schleicher that was the final cut helping Hitler become Chancellor in 1933. ...read more.