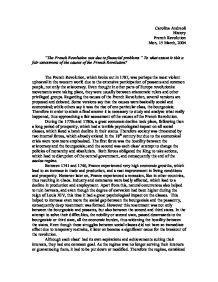 Although each class' had its own aspirations and achievements suiting their interests, they had one common goal. As the regime was no longer serving their interests or guaranteeing them, it had to be put down or modified. Therefore the regime, combined with other pressures, finally collapsed. Each class then developed tactics to fulfill their interests and implement them to the new government which was under construction. The nobility feared absolutism profoundly, and with the banishment of the parlements, which cherished the power of the nobility, they were even more scared. Therefore the first thing the nobility did was to restore these parlements, and after they demanded the establishment of the Estates General, which also gave them power. The bourgeoisie agreed on the establishment of the Estates General because it would allow them to have more control on political institutions and to reconstruct the economic structure. However this idea changed when they realized that representative institutions rather than the Estates General would bring them more advantages, both politically and economically. ...read more.

The French Revolution indeed had great influence on some European countries such as Ireland, the Netherlands, Poland and others; but there were other common factors that affected all Europe. One was the rapid growth of population, which was from about 100 million to 200 million people. Another was a great period of depression followed by very prosperous years. The consequences were lack of land resources, unemployment and economical problems. However almost all of the movements taken place around Europe ended in fiasco, but the French Revolution experienced several changes in political, economical and social areas. Concluding it can be said that the French Revolution was mainly caused by financial problems. However there were several other factors such as social resentment and political anarchy, which also led to the break out of the revolution. Even though philosophes did not have any direct influence, they incited people to express their feelings and to fight for a cause that they believed was important. In order for negative things to change, one has to fight for them, and that was what the French did. ...read more.