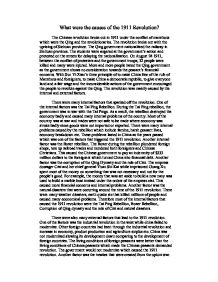 CHINA: What were the causes of the 1911 Revolution?

What were the causes of the 1911 Revolution? The Chinese revolution broke out in 1911 under the conflict of manzhous which were the Qing and the revolutionaries. The revolution broke out with the uprising of Sichuan province. The Qing government nationalized the railway in Sichuan province. The students were angered at the government's action and protested on the streets for delaying the nationalization. On August 24 1911, between the conflict of protesters and the government troops, 32 people were killed and many were injured. More and more people hated the Qing government as the government shows no consideration towards the peasant's financial concerns. With Sun Yi Xian's three principle of to make China free of the rule of Manzhous and foreigners, to make China a democratic republic, to give everyone land and a fair wage and the inconsiderable actions of the government encouraged the people to revolute against the Qing. ...read more.

Another factor was the corruption of the Qing Dynasty and the role of Cixi. The empress dowager Cixi and her chief general Yuan Shi Kai while imprisoned Guang Xu spent most of the money on something that was not necessary and not for the people's good. For example, the money that was set aside to build a new navy was used to build a marble boat instead under the orders of the empress cixi. This caused more financial concerns and internal problems. Another factor was the natural disasters that were occurring around the time of the 1911 revolution. There were many weather disasters, earth quake etc that killed millions of people and caused many economical problems. Therefore most of the internal factors that caused the 1911 revolution were the Tai Ping Rebellion, Boxer Rebellion, Corruption of Qing dynasty and the role of Cixi and natural disasters. There were also many external factors that lead to the 1911 revolution. ...read more.

the import duty, pay 21 million dollars to Britain as indemnity and Abolish the Gong hangs and correspondence in the form of petitions. These treaties weakened China as a whole that caused the 1911 revolution. Another factor was the scramble for concessions. After the defeat of China in the Sino-Japanese war, the foreign powers began to demand more from China. These concessions allowed foreign countries to establish their spheres of influence and some degree of political or financial control that minimized Chinese government's power, taking over China in another way. These concessions made the living conditions of peasants harsh as the foreign countries were mostly in control. Therefore most of the external factors that caused the 1911 revolution were China failed to modernize, unequal treaties created as a result of the opium war, China's cause of the defeat of wars and the scramble for concessions. In conclusion the 1911 revolution was caused by various internal and external factors accompanied with the three principle of Sun Yi Xian. ...read more.