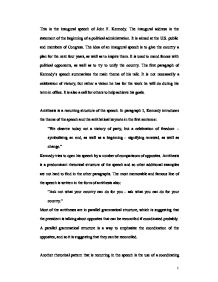 This is the inaugural speech of John F. Kennedy. The inaugural address is the statement of the beginning of a political administration. It is aimed at the U.S. public and members of Congress. The idea of an inaugural speech is to give the country a plan for the next four years, as well as to inspire them. It is used to mend fences with political opponents, as well as to try to unify the country. The first paragraph of Kennedy's speech summarizes the main theme of his talk. It is not necessarily a celebration of victory, but rather a vision he has for the work he will do during his term in office. It is also a call for others to help achieve his goals. Antithesis is a recurring structure of the speech. In paragraph 1, Kennedy introduces the theme of the speech and the antithetical keynote in the first sentence: "We observe today not a victory of party, but a celebration of freedom - symbolizing an end, as well as a beginning - signifying renewal, as well as change." Kennedy tries to open his speech by a number of comparisons of opposites. ...read more.

in the beginning of the paragraph for 7 times. These sentences are also employing inversion with the group of people being addressed placed in the beginning of the sentence, thus emphasizing the importance of those groups of people. Also, from paragraph 14 to 17, the President is suggesting a course of action ("Let both sides..."), and he uses "let both side" in the beginning of the paragraph for 4 times. These two sections (paragraphs 6-11 and paragraphs 14 to 17) are again making use of parallelism. In addition, by repeating the same words in the beginning of clauses, a sense of coordinateness is emphasized. It also adds rhythm to the speech. Regarding the word choice of the above two sections in the speech, the President repeatedly uses "pledge" in paragraph 6 to 11, suggesting that what he is saying is even stronger than a promise and thus making his speech more formal and serious. Besides, the effect of the repeated use of "let" is that they lay down a progress of actions instead of commands. They can induce action from the audience. Kennedy wants to persuade the audience to act rather than to force them. ...read more.

In paragraph 23, he uses two rhetorical questions "Can we forge against these enemies a grand and global alliance, North and South, East and West, that can assure a more fruitful life for all mankind? Will you join in that historic effort?" These questions occur at a point where the President is about to deliver his peroration. Up to this point he has been declaring what he will do and what the Americans can do. Now he wants to suggest what the rest of the world can do to support his program of peace. There is also use of imperatives. In the last 3 paragraphs of the speech, we see three sharp imperatives, using "ask", which encourage the citizens to act. The audience is no loner mere listeners but they can engage actively. These imperatives suggest the action that should be taken by the citizens. On the whole, the speech consists of simple vocabularies, with occasional use of archaic diction, such as "forebears", "anew", "dare", and "foe" etc. Also, there is a religious and reverential tone, with the President's invocation to God for a few times. All these are adding formality to the speech. The devices used by Kennedy are all carriers of meaning and they all serve to make the speech a more effective and appealing one. ?? ?? ?? ?? 1 ...read more.