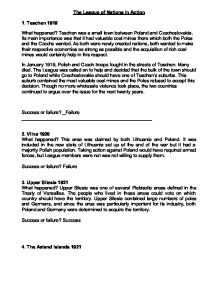 The League of Nations in Action - successes and failures.

The League of Nations in Action 1. Teschen 1919 What happened? Teschen was a small town between Poland and Czechoslovakia. Its main importance was that it had valuable coal mines there which both the Poles and the Czechs wanted. As both were newly created nations, both wanted to make their respective economies as strong as possible and the acquisition of rich coal mines would certainly help in this respect. In January 1919, Polish and Czech troops fought in the streets of Teschen. Many died. The League was called on to help and decided that the bulk of the town should go to Poland while Czechoslovakia should have one of Teschen's suburbs. This suburb contained the most valuable coal mines and the Poles refused to accept this decision. ...read more.

Upper Silesia was one of several Plebiscite areas defined in the Treaty of Versailles. The people who lived in these areas could vote on which country should have the territory. Upper Silesia contained large numbers of poles and Germans, and since the area was particularly important for its industry, both Poland and Germany were determined to acquire the territory. Success or failure? Success 4. The Aaland Islands 1921 What happened? These islands are in the Baltic Sea about half way between Sweden and Finland Both nations claimed the islands and seemed ready to fight over them, but they invited the league to reach a judgement on the dispute. It decided the islands should be awarded to Finland, and Sweden accepted this. ...read more.

The League arranged international loans for the two countries. With this help, both Austria and Hungary were able to begin economic recovery. Success or failure? Failure 7. Greece and Bulgaria 1925 What happened? After the treaty of Neuilly, the border between Greece and Bulgaria remained a source of tension between the two nations. After a number of violent incidents, the Greeks invaded Bulgaria in October 1925.On this occasion the League intervened effectively. It condemned the Greek action and pressurised them to withdraw, which they did. Verdict on the League: Successful action brought a return to peace - exactly what the League was for. But cynics suggested that the League was only willing to take firm action when no great powers were involved Success or failure? Success How many successes? 3 How many failures? 4 ?? ?? ?? ?? ...read more.