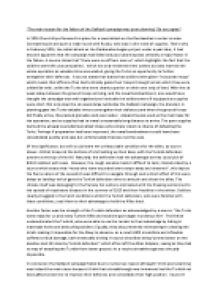 The main reason for the failure of the Gallipoli campaign was poor planning Do you agree?

Transfer-Encoding: chunked ﻿?The main reason for the failure of the Gallipoli campaign was poor planning? Do you agree? In 1914 Churchill put forward his plans for a naval attack on the Dardanelles in order to seize Constantinople and open a trade route with Russia, who was in dire need of supplies. That?s why in February 1915, the initial attack on the Dardanelles began yet just under a year later, it had become apparent that the campaign had failed and poor planning was certainly a major factor in the failure. A source states that ?there were no officers near us? which highlights the fact that the soldiers were left unaccompanied , which not only rendered them useless but also harmed the whole operation as valuable time was wasted, giving the Turks an opportunity to further strengthen their defences. ...read more.

The poor supplies harmed the already overwhelmed allied troops who simply stood no chance of defeating the Turks. Perhaps if preparation had been improved, the naval bombardment could have been consolidated quickly and ease but unfortunately that was not the case. Of less significance, but still crucial were the unfavourable conditions for the allies, as source shows - British troops at the bottom of a hill setting up their base, with the Turkish defenders present at the top of the hill. Naturally, the defenders had the advantage as they could pick of British soldiers with ease. However, the rough sea also made it difficult to land, characterised by a source which states that ?many who were wounded were swept away and drowned?, this depicts the fierce nature of the sea which was difficult to navigate through and a direct effect of this were delays at landing- which gave the Turkish defenders time to ambush and shoot the allies. ...read more.

Equally, they also prevented minesweepers clearing the straits making it impossible for the Navy to advance- as a result HMS irresistible and inflexible suffered critical damage, both eventually sinking. A source describes being ?pinned down on the beaches and hill sides by Turkish defenders? which often left the Allies helpless, seeing as they had no way of attacking the Turkish from lower ground. As a result a breakthrough was virtually impossible. In conclusion the Gallipoli campaign failed due to numerous reason although I think poor planning was indeed the main cause because I think that a breakthrough was immanent had the Turkish not been gifted extra time to improve their defences and consolidate their high position. Source D attributes the failure to poor planning and organisation- and I think this is correct because many soldiers too lacked focus on their individual roles within the campaign ultimately resulting in their failure. ...read more.