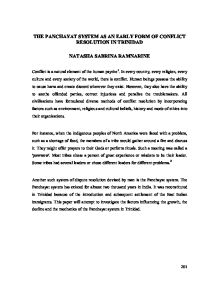 The Panchayat system as an early form of conflict resolution in Trinidad.

THE PANCHAYAT SYSTEM AS AN EARLY FORM OF CONFLICT RESOLUTION IN TRINIDAD NATASHA SABRINA RAMNARINE Conflict is a natural element of the human psyche1. In every country, every religion, every culture and every society of the world, there is conflict. Human beings possess the ability to cause harm and create discord wherever they exist. However, they also have the ability to soothe offended parties, correct injustices and penalize the troublemakers. All civilizations have formulated diverse methods of conflict resolution by incorporating factors such as environment, religious and cultural beliefs, history and mode of ethics into their organizations. For instance, when the indigenous peoples of North America were faced with a problem, such as a shortage of food, the members of a tribe would gather around a fire and discuss it. They might offer prayers to their Gods or perform rituals. Such a meeting was called a 'powwow'. Most tribes chose a person of great experience or wisdom to be their leader. Some tribes had several leaders or chose different leaders for different problems.2 Another such system of dispute resolution devised by man is the Panchayat system. The Panchayat system has existed for almost two thousand years in India. It was reconstituted in Trinidad because of the introduction and subsequent settlement of the East Indian immigrants. This paper will attempt to investigate the factors influencing the growth, the decline and the mechanics of the Panchayat system in Trinidad. Normally, the people of the Diaspora may revive and reconstitute particular aspects of their cultural and ancestral heritage3. The revival of cultural traditions by the diasporic community depended on a number of factors. 1) The conditions under which their ancestors left the homeland. 2) The distance in which the diasporic community is now located in relation to the homeland. 3) The duration of settlement in the host country 4) The economic and political conditions in the host country4. ...read more.

The headman was usually called the Mukhiya or the jamindar54. The members were known as panchas or panches. In Trinidad, the Panchayat comprised of men from all three religions and not from the Hindu religion alone. Due to the communising experience of Indentureship, caste was eroded. However, upon the settlement of the Indian population in the post Indentureship period there seemed to be the resurgence of caste55 but as a deviation of its original form. For example, shopkeepers cared little about caste in the true sense but rather for economic gain and social position56. There was an ideology of equality in the Panchayat (among the members) that was demonstrated by the panchas deference to others, by the discourse of the Panchayat and by the physical arrangement of the meeting. Everyone sat on the same level, crowded in a circle on chairs or on cloths spread on the floor. The disputants however were not welcomed in the circle but rather placed so that all members could look at them.57 The principal spokesmen were part of the general mass of silent, listening members, it was not unusual to see two disputants sitting together in silence as if disconnected from the issue58. Panchayat rhetoric was rather poetic and polite59 because the members utilized a great deal of sayings and alluded to stories from various religious texts. As Pundit Outam Maharaj said, "Hindu, Muslim, big and small are elders. This is our village; we are all brothers and sisters60. The concept of community among the East Indian population in Trinidad often implied familial and kinship ties and as a result, Panchayat audiences were always large. The Panchayat audience usually included many concerned friends and relatives of the plaintiff and the defendant. According to Mr Noor61 Panchayat audiences were usually very quiet and respected the ruling of the panchas. There were some cases, however, as in the Indian National Panchayat of 1899, where some men were very angry and disruptive. ...read more.

45 In my research I did not come across anyone who remembered any person being made an outcaste. It was just the standard by which things would have been done. This of course does not mean that it did not occur at all. 46 Recognition in the sense of a headmaster - everyone acknowledges that fact that he is important. 47 There were old men - old age implying wisdom and experience through the teaching of life. 48 Patricia Mohammed. A Social History of Post Migrant Indians in Trinidad 1917-1947 (1994). 49 Panchayat operated by members of one caste for that caste alone. 50 Judith Ann Weller The East Indian Indenture in Trinidad 1968 page 52. 51 Op. Cit. p. 15 52 Islamic equivalent to a Christian Priest or Pastor, representative of Allah. 53 Interview with Laxmi Pundit on July 26th 2002 in Arouca. Pundit is 75 years of age. 54 The jamindar in all likelihood is the degrogatory of zimindar which was a large landowner. 55 Caste not in the traditional sense of the word but as social status. 56 Caste became affiliated with financial status, social status and physical features rather than birth. 57 J.C.Jha. The Indian National Panchayat of 1899. Page 2. 58 Interview with Sundar Pantin on 1st June 2002. 59 Ibid 60 Interview with Pundit Outam Maharaj 61 Interview with Nazir Noor. July 18th 2002 62 Interview with Madam Mungroo. July 17th 2002 63 Interview with Mr. Harold Phekoo. July 20th 2002. 64 Interview with Dit Sookhoo. May 25th 2002. 65 Interview with Maharajin on August 3rd 2002 in Fyzabad. This woman is appropriately called Maharajin because of her deep involvement and influence in the religious development of Fyzabad and Avocat. She is 85 years of age. 66 Interview with Nazir Noor. 67 Hindu Prayers in which obeisance is made to Mother Kali 68 Op. Cit. p 173-175 69 One of the two epic poems of India, written in the Vedic period. 70 Steven Vertovec Hindu Trinidad-Religion, Ethnicity and Socio-Economic Change 1992. Page 160. 201 ...read more.