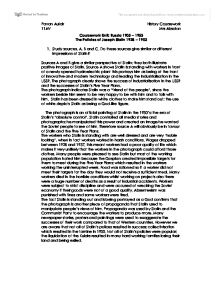 Coursework Unit: Russia 1905 - 1953 The Policies of Joseph Stalin 1928 - 1953 1. Study sources, A, B and C. Do these sources give similar or different impressions of Stalin? Sources A and B give a similar perspective of Stalin; they both illustrate positive images of Stalin. Source A shows Stalin is standing with workers in front of a newly opened hydroelectric plant this portrays him as being at the front of innovative and modern technology and leading the industrialisation in the USSR. The photograph clearly shows the success of industrialisation in the USSR and the successes of Stalin's Five Year Plans. The photograph indicates Stalin was a "friend of the people", since the workers beside him seem to be very happy to be with him and to talk with him. Stalin has been dressed in white clothes to make him stand out; the use of white depicts Stalin as being a God-like figure. The photograph is an official painting of Stalin in the 1930's; the era of Stalin's "absolute control". Stalin controlled all media stories and photographs; he manipulated this power and created an image he wanted the Soviet people to see of him. Therefore source A will obviously be in favour of Stalin and the Five Year Plans. The workers who Stalin is standing with are well dressed and are very "noble looking", when in fact workers worked in harsh conditions. Wages dropped between 1928 and 1937, this meant workers had a poor quality of life which makes it very unlikely that the workers in the photograph could afford those clothes. Many people were pleased to see Stalin but most of the working population hated him because the Gosplan created impossible targets for them to meet during the Five Year Plans; which resulted in the workers working the uninterrupted week. Food was rationed so if a worker did not meet their targets for the day they would not receive a sufficient meal. ...read more.

Which of these two sources gives the most reliable view of Stalin? Source I is an extract from a speech given to the Congress of Soviets in 1935. The extract thanks Stalin and uses Biblical language throughout. The speech is full of praise and flattery of Stalin "his strength, his charm, his greatness." The speech was published in a paper of the Communist Party in the USSR. Therefore the source is likely to be biased and pro Stalin. This is obvious because it was published in 1935, when Stalin had absolute power over all media and official documents. Stalin would not allow negative press to be published about him. This is what created his cult of personality. Source I uses biblical language, which portrays Stalin as a "God-like" man: "men of all ages will call thy name" The source could be fake to show how brilliant Stalin is. However there is a slight possibility of truth in the extract; this is because the people in the Soviet Union genuinely loved Stalin. This was a result of his control and propaganda. Stalin's cult of personality created a heroic and idealized public image. The language is extremely "over the top" and exaggerates how brilliant Stalin was: "I have experience a great desire to sing out, to shout with joy and happiness." Source J, is an extract from a speech given by Bukharin in 1936. It was given in Paris, outside the USSR and Stalin's control. The source is more reliable than source I for this reason; Stalin could not censor Bukharin's speech. It is also more reliable because Bukharin knew and worked with Stalin, this source is written by someone who had a firsthand experience with Stalin. Although Bukharin was a supporter of Stalin in the "Stalin vs. Trotsky" power struggle; he became a victim of Stalin's purges in 1938. He was imprisoned after Stalin succeeded in the position of "Supreme Leader". ...read more.

Stalin is drawn as the judge, the jury and the lawyer. He is also shown as the stenographer, writing the official records showing the complete "absurdity of [his] rule". Many historians agree Stalin had too much power and he could even re-write the history. After Trotsky was purged he used propaganda to depict his as a German spy and a monster. However, sources F, G and H all show Stalin genuinely cared about education and so launched the education provision. Source F states the achievements of this policy and how successful it was: "victory over the traditional peasant curse of illiteracy. This affected 75% of the population in 1917 but was rare by 1939." Source G is a biased photograph published in the USSR during Stalin's reign. However it still shows the success of Stalin's policy, all the boys are disciplined and are being educated in a clean and well resourced school. Although it is very unlikely all schools were up to the same standard, it shows the education provision was a success. Source H shows the change Stalin wanted in all regions. The peasant family is being taught how to read and write; another step towards eliminating illiteracy. Although it is an official poster and biased; it does show how the "victory over the traditional peasant curse of illiteracy" was won. Sources D and I are irrelevant because they describe Stalin as a man and not his policies. Source D shows he had an "evil side" but also that he was a "gifted politician and one of the greatest political figures of the twentieth century." Source I states how power corrupted him: "Absolute power turned a ruthless politician into a monstrous tyrant." Source I is biased but could be true because it illustrates the cult of personality Stalin created. The biblical language used and God-like portrayal show it is pro-Stalin. ?? ?? ?? ?? Pavan Aulak History Coursework 11AV Mrs Absolon ...read more.