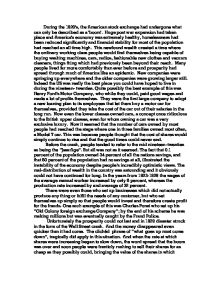 The Wall Street crash, the great depression and its how it affected the lives of the American People

This document was downloaded from Coursework.Info - The UK's Coursework Database Click here to visit Courswork.Info History course work. During the 1920's, the American stock exchange had undergone what can only be described as a 'boom'. Huge post war expansion had taken place and America's economy was extremely healthy, homelessness had been reduced significantly and financial stability for most of the population had reached an all time high. This newfound wealth created a time where the ordinary working class people would find themselves being capable of buying washing machines, cars, radios, fashionable new clothes and vacuum cleaners, things thing which had previously been beyond their reach. Many people lived far more comfortably than ever before and prosperity had spread through much of America like an epidemic. New companies were springing up everywhere and the older companies were growing larger still. Indeed the US was really the best place you could have hoped to live in during the nineteen- twenties. Quite possibly the best example of this was Henry Ford's Motor Company, who while they could, paid good wages and made a lot of profits themselves. They were the first large company to adopt a new loaning plan to its employees that let them buy a motor car for themselves, provided they take the cost of the car out of their salaries in the long run. Now even the lower classes owned cars, a concept once ridiculous to the British upper classes, even for whom owning a car was a very exclusive luxury. Now it seemed that the number of cars owned by most people had reached the stage where one in three families owned most often, a Model T car. This was because people thought that the cost of shares would simply continue to rise and that the good times could never end. Before the crash, people tended to refer to the mid nineteen-twenties as being the "Jazz Age". ...read more.

Though small attempts were made in 1923 to help the farmers' situation, but these were not particularly helpful, as the government seemed to be more concerned with the welfare of the newer, more active businesses such as the automobile industry which at this stage was creating more money. They did not appreciate the fact that the agricultural industry would be an ever-reliant source of business. Because of the fact that though the people can reach a stage where they do not and will not need a new washing machine, car or radio, they will never stop needing food produced by the farms. This was why it would have been a very good idea for the American government to have stepped in and done something about steering the farming businesses off the path towards recession. When the thirties came they were already in debt and so it was even harder for them to repay their debts as they were making very little profits out of their businesses. The troubles in agriculture were definitely a major long-term cause of the depression because the farmers made up a very large proportion of the population and the economy. The farming business remained this way for two decades, so effectively the depression started for the farmers not by the Wall Street crash but by ten years early when their trouble started. Another problem, which the Americans were faced with, was that the distribution of international wealth was very uneven. While the 20's had been a time of pleasure and financial gain for the Americans, they had been a time of relative hardship in much of Europe because countries were finding it hard recovering from the war. During the war America had lent its allies 7 billion dollars and then another 3.3 billion during the 20's. These Europeans were buying American goods using American money. 90 percent the loans made were used to buy US goods. ...read more.

Unlike most speculators, these men emerged from the crisis as winners, having gained sometimes in huge proportions from the whole experience. The depression was an incredibly unhappy time for many who loved their work. There were large numbers of very skilled workers who were laid off during the depression. They spent many years standing in lines outside soup kitchens waiting for free morsels of food just to keep them alive, when they felt that they should have been earning their living, instead of being charity cases on the streets of America. This must have been an incredibly depressing time for many of the Americans who had seen their hopes for a long career go up in flames as they were sacked from their jobs one by one. This, as well as the basic need for food for survival was the main reason behind the increase in crime during this time. To summarise, the Depression was a time when millions suffered as a result of the Wall Street crash and the general deprivation of the welfare of the stock market as well as the neglect of other industries on a long-term basis. The Crash was obviously the most final trigger, which caused the beginning of 10 years which symbolised the unhappiest days the American population had seen for the few hundred years before it occurred. The institution I feel is most responsible for the incident was the republican party who were in power at the time of the disaster and whose policies of not taking too much interest in the state of all of the industries resulted in the party's eventual down fall. Edgar Hoover, though he did his best was not able to revive the nations economy and industry from its troubles and despite having spent only a fairly small amount of time in power, none the less was not successful during his term of office. I cannot help but feel that the depression could have been avoided had it not been for the selfish, money hungry way in which the stock market and other industries were handled during the 20's. ...read more.