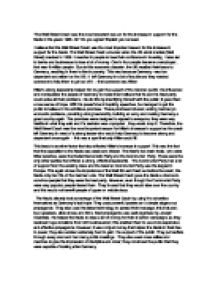 The Wall Street Crash was the most important reason for the increase in support for the Nazis in the years 192832. Do you agree?

Therefore, the Wall Street Crash was the most important reason for Hitler's increase in support as the crash left Germany in need of a strong leader who would help Germany to become strong and dependent once again - this was a spot that only Hitler could fill. This leads to another factor that also affected Hitler's increase in support. This was the fact that the opposition to the Nazis was weak and divided. The Nazi's two main rivals, who were bitter enemies, were the Social Democratic Party and the Communist Party. These were the only other parties that offered a strong, effective leadership. The Communist Party had a lot of support from the working class and the German Communist Party was the largest in Europe. ...read more.

He helped the Nazis to raise a lot of money for their election campaigns as they received huge donations from rich businessmen; this enabled them to use more expensive and effective propaganda. However, it was not just money that helped the Nazis in their rise to power; they also worked extremely hard to gain the support of the public. They put leaflets through every door and had many public meetings. They also used mass rallies and marches to give the impression of discipline and order; they convinced the public that they were capable of looking after Germany. In conclusion the Wall Street crash was an extremely important factor in helping the Nazis in their rise to power and increasing their support from the German public. The Wall Street crash left Germany in need of major help and Hitler and the Nazis convinced the public that they were the only solution to all of Germany's problems. ...read more.