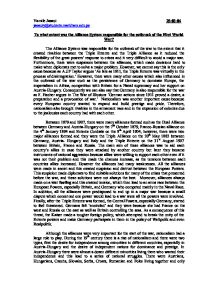 To what extent was the Alliance System responsible for the outbreak of the First World War?

Yamile Jasaui 25-03-04 [email protected] To what extent was the Alliance System responsible for the outbreak of the First World War? The Alliance System was responsible for the outbreak of the war to the extent that it created rivalries between the Triple Entente and the Triple Alliance as it reduced the flexibility of the great powers' response to crises and it very difficult to avoid a major war. Furthermore, there were suspicions between the alliances, which made decisions hard to make when diplomats met to solve a major problem. However, we cannot say this is the only cause because as A.J.P Taylor argues 'As late as 1911, the Triple Entente was virtually in the process of disintegration.' However, there were many other causes which also influenced in the outbreak of the war such as the persistence of Germany to dominate Europe, the imperialism in Africa, competition with Britain for a Naval supremacy and her support on Austria-Hungary. Consequently we can also say that Germany is also responsible for the war as F. Fischer argues in The War of Illusions 'German actions since 1911 proved a desire, a preparation and a provocation of war.' Nationalism was another important cause because every European country wanted to expand and build prestige and pride. Therefore, nationalism also brought rivalries in the armament race and in the expansion of colonies due to the jealousies each country had with each other. Between 1879 and 1907, there were many alliances formed such as the Dual Alliance between Germany and Austria-Hungary on the 7th October 1879, Franco-Russian alliance on the 4th January 1894 and Entente Cordiale on the 8th April 1904, however, there were two major alliances formed and they were the Triple Alliance on the 20th May 1882 between Germany, Austria- Hungary and Italy and the Triple Entente on the 31st August 1907 between Britain, France and Russia. ...read more.

Germany wanted the whole of the French Congo as a compensation of giving up all the claims on Morocco, but the British intervened and this caused Germans to feel powerless as they felt they weren't allowed to handle their own affairs. In Germany, von Moltk, emphasized how important it was to countries, not to be humiliated, 'If we once again crawl out of this affair with our tail between out legs, if we cannot pull ourselves together and take an energetic line which we are ready to back up with the sword, I despair of the future of the German Empire and shall quit.' This emphasises the idea of the German politicians desire for world power and their willingness to use violence to reach their objectives. Germany's foreign policy during the periods of 1890 to 1914, acted as a catalyst. Most of Germany responsibility lies on the Kaiser and on the military leaders. When Wilhelm II came to power he changed Germany in such a way that she became more aggressive and she was prepared to use violence to achieve her ambitions. Bismark, the German Chancellor of that time, said that the new impulsive Kaiser was "like a balloon. If you don't hold fast to the string, you'll never know where he'll be off to." The power in Germany rested on the Kaiser and on the military establishment, which produced domestic instability such as the unrest among the working class, the rise of socialism and dislike of most German parties towards the government. It is for this reason, that the idea of war would make the Kaiser popular because he would have the chance to recreate the glory days in 1871. ...read more.

However, war could have been stopped, but as LCF Turner argues 'it was a tragedy of miscalculation' which led to those consequences. In conclusion, the Alliance system wasn't totally responsible for the outbreak of the war. There were other factors, which influenced and acted as a catalyst to the war. Nationalism was an important factor because it had been growing and expanding to the European countries and it made people want to feel proud about their countries. Furthermore, with nationalism nations became jealous of the achievements of others, and all of them felt a need for defence. They thought that the best way of defence was being offensive, and they had the false hypothesis that the one who would mobilize first would win the war. Nationalism also makes countries act depending on their self-interests and this was the case of France when Germany demanded her to stay neutral, Premier Ren� Vivani replied that 'France would act in accordance with its interests.' Furthermore, the role of Germany was very important, because it lead to the naval race, the attack on Serbia because Germany had given all her support to Austria and the willingness of the Kaiser to use violence to achieve Germany's ambitions. Therefore, we could also consider the view of F. Fischer who said that 'Germany was responsible for the war because of its aggressive pursuit of its weltpolitik'. However we cannot forget that there were minor causes such as the ignorance of people towards how the war was going to be. Finally, yes, the Alliance System was responsible for the war to the extent that it created major rivalries between the European Powers and made war to be a chain of events due to the alliances and agreements of defence that each of the allies had made with each other. ...read more.