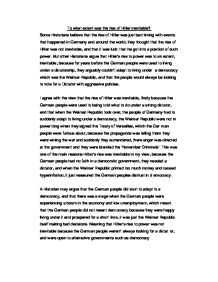 To what extent was the rise of Hitler inevitable?

To what extent was the rise of Hitler inevitable? Some Historians believe that the rise of Hitler was just bad timing with events that happened in Germany and around the world, they thought that the rise of Hitler was not inevitable, and that it was luck that he got into a position of such power. But other Historians argue that Hitler's rise to power was to an extent, inevitable, because for years before the German people were used to living under a dictatorship, they arguably couldn't adapt to living under a democracy which was the Weimar Republic, and that the people would always be looking to vote for a Dictator with aggressive policies.. ...read more.

It was because of this that Hitler's rise was inevitable in my opinion, because of the dire situation the German people were in. An argument to this would be that, It was only because of a congregation of international incidents, together that made the German people politically polarize. I think that before the incidents such as signing of the treaty of Versailles and hyperinflation it was not inevitable that Hitler would come to power, because if those incidents didn't happen the German people wouldn't have polarized so much and would have stayed with a democracy or maybe a more politically central dictator. But after those events the rise of Hitler's rise was inevitable, because the German people had polarized to such an extent that they thought Hitler could dig them out of the hole they were in. ...read more.