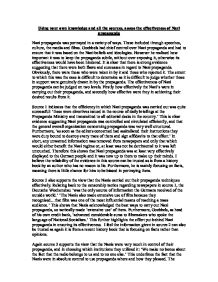 Using your own knowledge and all the sources, assess the effectiveness of Nazi propaganda.

Using your own knowledge and all the sources, assess the effectiveness of Nazi propaganda Nazi propaganda was portrayed in a variety of ways. These included through speeches, culture, the media and films. Goebbels had chief control over Nazi propaganda and had to ensure that it was based on the Nazi beliefs and ideologies. However he realised how important it was to keep the propaganda subtle, without over exposing it, otherwise its effectiveness would have been hindered. It is clear that there is strong evidence suggesting that there were both flaws and successes in regard to Nazi propaganda. Obviously, there were those who were taken in by it and those who rejected it. The extent to which this was the case is difficult to determine as it is difficult to judge whether those in support were genuinely drawn in by the propaganda. The effectiveness of Nazi propaganda can be judged on two levels. Firstly how effectively the Nazi's were in carrying out their propaganda, and secondly how effective were they in achieving their desired results from it. Source 1 indicates that the efficiency in which Nazi propaganda was carried out was quite successful: 'these were directives issued in the course of daily briefings at the Propaganda Ministry and transmitted to all editorial desks in the country.' ...read more.

Some people could see what the Nazis were attempting to do; '...a rather turgid sheet, which had the reputation of having developed quite a technique in camouflaged reporting.' Furthermore, 'It seemed that others had been brought up to think likewise.' This supports the view that Nazi propaganda was ineffective, and there were a considerable amount of people who were not taken in by it. Source 5 finishes by stating that The Times was 'often sold out.' This can support both views. Either the Nazi propaganda was ineffective to many, as people were buying an alternative paper, or that the Nazis were carrying out their propaganda techniques effectively, as people were only able to read what they wanted them to. The evidence given in sources 3 and 5 cannot be relied upon too heavily as they are both written by people on the opposite ends of the spectrum. Goebbels in source 4 is likely to be supporting the ways in which Nazi propaganda was carried out, whereas an opponent of the regime as in source 5 is likely to be dismissing them. Furthermore they only represent one persons view, giving a limited viewpoint to how other groups felt. Source 4 continues the view that Nazi propaganda was very ineffective; '...enthusiasm had fallen to the point where Northeimers had made themselves conspicuous at the beginning of celebrations.' ...read more.

This kind of resentment to the Nazis also drove other young Germans away from such Nazi organizations. Thus the Edelweiss Pirates and other organizations were formed as an alternative to the Hitler Youth. They were anti-Nazis and would often perform activities such as assaulting Hitler Youth members. The audacity of these young people's actions, in the face of severe punishments, underlines their commitment to resisting the system that tried to influence them. To conclude, the Nazi's propaganda programme, was in many respects was very successful. There were a large majority of people who genuinely believed and supported what they were being told. By the late 1930's Hitler was admired by 90 percent of all Germans. Many others, who were not so indoctrinated by it, were at least pleased to see a regime that was intent on making Germany a powerful nation again. There were also people who could see straight through it, but were too scared to act out, so instead just chose to tolerate it. Lastly there were also those opposed to the regime. However, I believe this was a minority to in comparison to these other groups, so therefore they could do little to prevent the force of the Nazis and their propaganda machine. Overall, whether or not German people were actually taken in by Nazi propaganda, it was generally effective in ensuring support and votes for the party. ...read more.