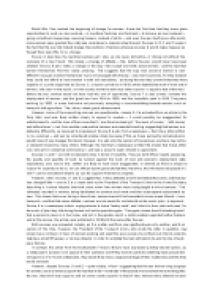 ﻿World War One marked the beginning of change for women- it was the first time that they were given opportunities to work as men worked ? in munitions factories and farmland ? to behave as men behaved ? going out without chaperones, wearing trousers, instead of skirts ? and even the war itself (soon after which some women were granted the vote) was considered a massive step forward. Sources A, B, C and F support the fact that the war did indeed change the positions of women, whereas sources D and E make it appear as though there was little, to no, change. Source A describes the ?wartime business girl,? who, as she never did before, is ?dining out? without ?the company of a man friend.? This shows a change of attitude ? this, before the war, would never have been allowed. Source B also notes a change in the way ?men speak and write about women,? and the fact that women themselves find this ?vastly amusing.? This suggests ...read more.

However, it is also only the opinion of one woman, and hers may not be a viewpoint shared by many others. Although, the fact that a newspaper printed this shows that it was either very relevant or somewhat controversial ? and was a piece to spark interest or agreement. Sources C and F are both somewhat similar in terms of reliability. They are both official reports assessing the quality and quantity of work by women against the work of men and women?s employment rates, respectively, and, due to this, neither are likely to have been exaggerated, or altered, as there is simply no reason for anybody to do so, nor are official reports generally falsified, therefore, the information displayed in C and F can be considered reliable, as can it?s support of women?s progress. However, other sources, D and E, suggest that, in fact, attitudes are still somewhat the same, and that war has changed little ? source D is a report sent by the President of the Transport Union ...read more.

In contrast, the article from the Southampton Times is likely to have expressed a widely shared opinion, as a newspaper?s purpose is to appeal to their audience and if they were to publish something many people did not approve of or found undesirable, they would likely lose a large percentage of their readership and this they would not want. However, despite Sources D and E ? quite reliably, in fact ? suggesting that the war did not bring progress for women, several others support the fact that it did ? hundreds of thousands more women were working after the war, that work was equal to and on some counts superior to that of men, woman were allowed out and about without chaperones ? and, shortly after the war, most likely due to their efforts, some women were granted the vote, and this, along with the content and distribution of the sources, suggest the First World War did in fact bring great progress in the position of women. ...read more.