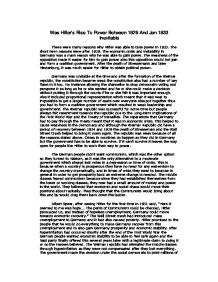 Was Hitler's Rise To Power Between 1929 And Jan 1933 Inevitable There were many reasons why Hitler was able to take power in 1933. The short term reasons were after 1929. The economic crisis and instability in Germany was a main reason why he was able to gain power. The weakness of the opposition made it easier for him to gain power also this opposition would not join and form a coalition government. After the death of Stressemann and later Hindenburg, it was much easier for Hitler to obtain political power. Germany was unstable at the time and after the formation of the Weimar republic, the constitution became weak the constitution also had a number of key flaws in it too. For instance allowing the chancellor to stop democratic voting and perspone it as long as he or she wanted and he or she could make a decision without putting it through the courts if he or she felt it was important enough. Also it included proportional representation which meant that it was near to impossible to get a larger number of seats over everyone else put together thus you had to form a coalition government which resulted in weak leadership and government. The Weimar republic was successful for some time but people always felt resentment towards the republic due to the Long-term implications of the First World War and the Treaty of Versailles. ...read more.

The Germans failed to develop their democracy to enable it to succeed instead they carried on their strong state led by a powerful leader. The natural even inevitable leader at this time was Hitler. He used the Brownshirts to parade in the streets and be on display; this was to show the militaristic side. Although still many people did not want a war at least it showed that Germany once again may be strong. He wore uniform when speaking to the people this showed that he was not above everyone but that he was a leader that really was going to act and not just think. He used a symbol, the swastika, to signify his party. He based his party on and used propaganda to promote the authoritarian foundations that he intended for Germany, much of this propaganda was thought up by Josef Goebbels who became a key figure in the Nazis party later. The democracy of the Weimar Republic was built upon weak foundations among the defeat of the First World War so this allows Hitler to reinforce his authoritarian ideas especially since Hitler was against democracy. Hitler was very politically skilled; he used dualism in the Reichstag to play his opponents off against each other. Despite the Nazis being revolutionary, they did eventually come to power using constitutional (they were elected they did not take power by force) ...read more.

The First World War created ideas that were foundations of Hitler's ideas. Eventually this led to a dictatorship in Germany and another World War. The non co-operation of the opposition to unite and stop him meant that he was allowed to rise to power quite successfully and easily. The eventual collapse of the Republic left the way open for Hitler. He came forward and took power successfully. As a strong leader was needed to get Germany back on its feet this was just what they needed to start with. The militaristic traditions in Germany was a long-term reason for Hitler being able to gain power as was the Treaty of Versailles and the First World war this was because they were ultimately the start of the problems Germany was facing. Allowing Hitler to gain control and then create a dictatorship. The fear of Communism was quite Long-term but this feeling grew stronger through Hitler's propaganda and his hatred of Communists. The Weimar republic was weak to start with and under all the stress it grew weaker progressively. Hitler used this to gain power, when it failed, he picked up the pieces afterwards and rebuilt Germany. Hitler's ideas were reinforced when it failed; the people were more even more willing to turn to Nazism. They could now see how democracy had treated Germany; it did not treat anybody favourably. Germany was weak in many ways at this time and Hitler took advantage of this weakness to gain power for himself. ...read more.