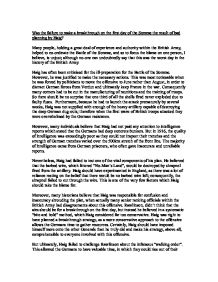 Was the failure to make a breakthrough on the first day of the Somme the result of bad planning by Haig?

Was the failure to make a breakthrough on the first day of the Somme the result of bad planning by Haig? Many people, holding a great deal of experience and authority within the British Army, helped to co-ordinate the Battle of the Somme, and so to focus the blame on one person, I believe, is unjust; although no-one can undoubtedly say that this was the worst day in the history of the British Army. Haig has often been criticised for the ill-preparation for the Battle of the Somme. However, he was justified to make the necessary actions. This was most noticeable when he was forced by politicians to move the offensive to June rather than August, in order to distract German forces from Verdun and ultimately keep France in the war. Consequently many corners had to be cut in the manufacturing of munitions and the training of troops. So there should be no surprise that one third of all the shells fired never exploded due to faulty fuses. Furthermore, because he had to launch the attack prematurely by several weeks, Haig was not supplied with enough of the heavy artillery capable of destroying the deep German dug-outs; therefore when the first wave of British troops attacked they were overwhelmed by the German resistance. However, many individuals believe that Haig had not paid any attention to intelligence reports which stated that the Germans had deep concrete bunkers. ...read more.

Many of the soldiers were conscripts, and so lacked the necessary training and experience to run across. If they had adopted a Blitzkrieg type of strategy then there would have been confusion and disorder throughout the Somme region; because bulges would form, leaving themselves flanked by the enemy, and then eventually they would be slaughtered. This is exactly what occurred two miles south of Beaumont Hamel, when the 36th Ulster Division ran to the German's line creating a bulge. Some may argue that Haig was to blame for the decision to walk; even so this method retained structure in this offensive which was imperative, especially when the headquarters was about 100 miles away. Understandably, Haig was lacking vital French troops who were defending Verdun. This meant that their forces fighting in the Somme region were stretched. Without these troops from the French Army, who were better trained and had more of the heavy artillery, a breakthrough on the first day would be very hard to achieve. I, along with many others, believe that General Haig can not be blamed for this problem. Morale was a fundamental part towards success, without it men would have lacked the will to fight. Therefore British troops were often told that "not a rat would be alive after the bombardment", and it would just be a "walk in the park". ...read more.

Understandably, the majority of people were shocked by the massive losses during the Battle of the Somme, whereas Haig thought differently. However in a war of attrition the Allies had the advantage, as their combined populations were great enough to allow such losses, while the Germans could not afford similar losses. Personally, I consider the Somme was a success, as the utmost aim was to distract German forces from Verdun, thereby saving the French from surrendering. Furthermore, to base one's opinion about General Haig on the first day of a four month campaign is unjust. Undoubtedly, the approach taken by the majority of senior officers was too liberal. Nevertheless, I consider Rawlinson and the politicians to be at blame just as much as Haig, because the politicians forced the offensive to be launched prematurely and Rawlinson created an offensive which he wanted, not Haig. However, Haig had failed to seize a firm command over this offensive and Rawlinson. However, ultimately I consider that it was the failure of the artillery bombardment which caused there to be no breakthrough on the first day. If the bombardment worked as well as previously intended, then a considerable amount of enemy territory would have been gained. There was no possibility that Haig could have ensured that the fuses were not faulty and that more heavy artillery was present. Therefore, I believe that Haig shouldn't solely take the blame for the failure to breakthrough on the first day. ?? ?? ?? ?? ...read more.