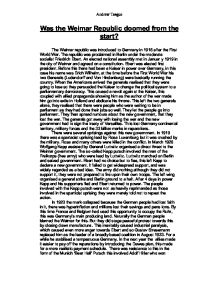 Was the Weimar Republic doomed from the start? The Weimar republic was introduced to Germany in 1918 after the First World War. The republic was proclaimed

Was the Weimar Republic doomed from the start? The Weimar republic was introduced to Germany in 1918 after the First World War. The republic was proclaimed in Berlin under the moderate socialist Friedrich Ebert. An elected national assembly met in January 1919 in the city of Weimar and agreed on a constitution. Ebert was elected first president. Before this there had been a Kaiser in power over Germany, in this case his name was Erich Wilhelm, at the time before the First World War his two Generals (Ludendorff and Von Hindenburg) were basically running the country. When the Americans arrived the generals realised that they were going to lose so they persuaded the Kaiser to change the political system to a parliamentary democracy. This caused a revolt against the Kaiser, this coupled with allied propaganda showing him as the author of the war made him go into exile in Holland and abdicate his throne. This left the two generals alone, they realised that there were people who were waiting to be in parliament as they had done their jobs so well. ...read more.

After 4 days in power Kapp and his supporters fled and Ebert returned to power. The people involved with the Kapp putsch were not as heavily reprimanded as those involved in the sparticist uprising they were merely told not to repeat the action. In 1923 the mark collapsed because the German people had lost faith in it, there was hyperinflation and millions lost their savings and pensions. By this time France and Belgium had used this opportunity to occupy the Ruhr, this was Germany's main producing land. Naturally the German people blamed the Weimar for this. But they did stage peaceful protest towards this by closing down manufacture. This inevitably caused industrial paralysis, which caused even more anger towards Ebert and so Gustav Stresemann replaced him as the leader of a broadly based coalition in August 1923. For a while he stabilised a tempestuous Germany. In the next year the allies made it easier to pay off the reparations by introducing the Dawes plan, this made for a more realistic payment schedule. ...read more.

The reason for this was, the people feared another economic breakdown like the one in 1923. So in March 1930 Chancellor Heinrich Br�ning took over using emergency powers. He tried to stabilise the Country by cutting government spending and securing the end, effectively, to the reparations payments. His policies however were overall unpopular so in 1932,he was forced to resign. This lead to the rise in popularity of the Nazi Party, in 1930 they were the second largest, their support growing as the depression deepened. In 1932 the Nazis became the largest party in the Reichstag. Hindenburg was persuaded to bring Hitler into the government, which lead to Hitler taking over completely and the end of the Weimar Republic. In truth the Weimar was completely doomed from the start due to; its formation, the decisions made by its somewhat incompetent leaders and poor judgement on the behalf of Hindenburg almost letting Hitler come into dictatorship. Finally a series of unfortunate events that occurred almost at the will of the anti Weimar's, that finally lead to the demise of the flawed democracy that it had become. A brilliant idea implemented by an unjust plan to pass the responsibility onto someone else. ?? ?? ?? ?? Andrew Teague ...read more.