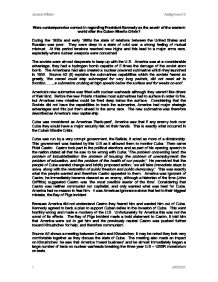 Were contemporaries correct in regarding President Kennedy as the savoir of the western world after the Cuban Missile Crisis?

Were contemporaries correct in regarding President Kennedy as the savoir of the western world after the Cuban Missile Crisis? During the 1950s and early 1960s the state of relations between the United States and Russian was poor. They were deep in a state of cold war; a strong feeling of mutual mistrust. At this period tensions reached new highs and this lead to a major arms race, especially where nuclear weapons were concerned. The soviets were almost desperate to keep up with the U.S. America was at a considerable advantage, they had a hydrogen bomb capable of 5 times the damage of the soviet atom bomb. The Americans had also created a nuclear powered submarine which they launched in 1955. Source A2 (ii) explains the submarines capabilities which the soviets feared so greatly, 'the vessel could stay submerged for very long periods, did not need air to function......, a submarine cruising at high speeds below the surface and for weeks on end'. America's new submarine was fitted with nuclear warheads although they weren't like others of their kind. Before the new Polaris missiles most submarines had to surface in order to fire, but Americas new missiles could be fired deep below the surface. Considering that the Soviets did not have the capabilities to track the submarine, America had major strategic advantages and this put them ahead in the arms race. The new submarine was therefore described as America's new capital ship. Cuba was considered as Americas 'Back-yard', America saw that if any enemy took over Cuba they would have a major security risk on their hands. ...read more.

There is a view that Khrushchev's intentions when sending the letter is that he is truly legitimate and cares about 'endangering world peace'. He is backing down as to avoid tension and ease relations. This was obviously not the American interpretation, as we see in source B5 (ii) which is displayed after the letter is sent. It symbolically shows an American victory by displaying a soviet ship Anosov carrying missiles back to Russia. A sweet victory, it seems. The American point of view tells us that Kennedy could definitely be considered as the saviour of the western world, but in order to make a competent decision we must take into account the soviet and Cuban views. Source C1 shows an extract from a speech made by Fidel Castro at the funeral of those Cuban's killed in the Bay of Pigs incident of April 1962. The speech displays Castro's true feelings toward the U.S. His frequent use of the word 'they' when referring to the Americans shows how mentally distanced from America he feels, he considers himself and Cuba to be very different. Castro refers to his 'revolution' as humble; he uses this adjective to display his intent, a peaceful one. Castro now felt threatened by the U.S and saw that with the help of the soviet missile sites the defence of Cuba would be much easier. Source C2 displays a poster produced by the Cuban Government inspiring all of the Cuban people to defend the country. The defence of Cuba was definitely a purpose for the Soviets placing missiles in Cuba but it was not their only reason. ...read more.

Source D4 shows an American cartoon, it is important to note the statement it makes. It attempts to display Kennedy and Khrushchev working together in order to control nuclear war, this cartoon differs greatly from the stereotypical western view shown in the British cartoon of source D3. Here is the classic western show-down scene, portraying Kennedy as the hero defending the western world from the 'evil' Khrushchev and his 'puppet' Castro. This is a valid interpretation but definitely a biased one. When we consider Robert Kennedy and Khrushchev's roles it is difficult to claim Kennedy is the saviour. Another historian who thought similarly was Tony Howarth. He wrote a summary of the missile crisis in 1972 and he claims that Kennedy wasn't the saviour; the crisis only gave him a better reputation. Howard uses the phrase, 'The Cuban crisis was a sobering experience for both Kennedy and Khrushchev'. He is explaining that it brought them to their senses over the threat of nuclear war and allowed them to solve the problem together through co-operation. Without the help of Robert Kennedy's agreement and the co-operation of the Soviets via Khrushchev the crisis may never have sub-sided and finalized in nuclear war and essentially mutually assured destruction. Therefore a sensible conclusion is that Yes, Kennedy did take a role in the saving of the western world by preventing nuclear war. This would not have been possible without the co-operation of Khrushchev when compromising, and the good advice given to Kennedy's from his Brother Robert Kennedy. Without this help the dispersion of the crisis may never have occurred. ...read more.