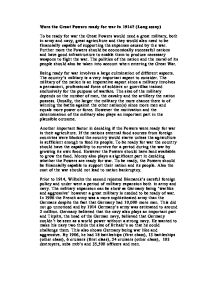 Were the Great Powers ready for war in 1914?

Were the Great Powers ready for war in 1914? (Long essay) To be ready for war the Great Powers would need a great military, both in army and navy, great agriculture and they would also need to be financially capable of supporting the expenses caused by the war. Further more the Powers should be economically successful nations and have good infrastructure to enable them to produce necessary weapons to fight the war. The politics of the nation and the moral of its people should also be taken into account when entering the Great War. Being ready for war involves a large culmination of different aspects. The country's military is a very important aspect to consider. The military of the nation is an imperative aspect since a military involves a permanent, professional force of soldiers or guerrillas trained exclusively for the purpose of warfare. The size of the military depends on the number of men, the cavalry and the artillery the nation possess. Usually, the larger the military the more chance there is of winning the battle against the other nation(s) since more men and equals more power or force. However the motivation and the determination of the military also plays an important part in the plausible outcome. Another important factor in deciding if the Powers were ready for war is their agriculture. If the nations external food sources from foreign countries were blocked the country would starve unless the agriculture is sufficient enough to feed its people. ...read more.

There was a much greater disparity between the upper and working classes. The politics of the nation and the moral of the people should also be sound if the nation is considered to be completely ready to fight a war. Despite being superior in a military sense, an industry sense and agricultural sense, Germany was not great in a political sense. From 1870-1914, Britain was the leading world power; its position was sustained by the royal navy. The British navy was larger than any other powers though it was widely distributed throughout the empire in small groups. Britain required a strong navy since the nation relied heavily on imports and its need for a market meant that free sea passage was important. However Britain's army was not as strong as their navy. The army was spread throughout the empire in defense and has been mostly successful. However the army was very small only equipped in fighting small easy wars. A small army doesn't mean it's not a strong army. The British army was small unlike the other larger European armies but it was professional and well trained. The moral and the determination of the army to succeed is also very important in winning wars not just the size. The army was polarised by class and small reaching a sum of 733,514, which was tiny compared to the standards of the European rivals. The BEF was the army Britain had available for the possible outbreak of war. The BEF was small with 1 permanent Corp, 1 Calvary division, 6 infantry divisions (20,000) ...read more.

There battle success was not great either since they were badly defeated by the Japanese army in 1904-1905. Despite having a poor army Russia's economy was booming. Savings accounts grew from 4,988,000 to 8,992,000 between 1905 and 1913. The national dept also significantly dropped. The average annual growth rate between 1907 and 1914 was over 6 per cent, which was higher then that of any other Western European country. However, to continue this development Russia needed both domestic harmonies, which was under threat and even more importantly peace with her neighbors. The assassination of Archduke Franz Ferdinand and the events which followed were to shatter both. There was some political instability before the war because the classes were beginning to reveal their grievances. In conclusion none of the Great Powers were completely ready for war. Germany and had a strong army which means the nation was ready in a military aspect but however they were not ready politically. Britain's army was minute however their navy was successful and Austria's army was also small. Russia had a large army but they were not financially capable of paying all the soldiers. Agriculturally Germany was excellent and politically Britain was good. However to be ready for war the nation must possess a culmination of several aspects such as a good military, good agriculture and industry and they should also be financially capable. None of the powers possessed this culmination and were strong in one aspect but not in the other. 1 P.33 Imperial Germany 1890-1918 by Ian Porter and Ian D.Armour 2 Lynn Abrams p.16 3 Parker and Armour p.21 4 Parker and Armour p.21 5 Parker and Armour p.21 6 Haig's war diaries introduction page 1 7 schoolnet.co.uk ...read more.