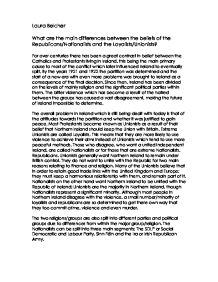 Laura Belcher What are the main differences between the beliefs of the Republicans/Nationalists and the Loyalists/Unionists? For over centuries there has been a great contrast in belief between the Catholics and Protestants living in Ireland, this being the main primary cause to most of the conflict which later influenced Ireland to eventually split. By the years 1921 and 1922 the partition was determined and the start of a new era with even more problems was brought to Ireland as a consequence of the final decision. Since then, Ireland has been divided on the levels of mainly religion and the significant political parties within them. The bitter violence which has become a result of the hatred between the groups has caused a vast disagreement, making the future of Ireland impossible to determine. The overall problem in Ireland which is still being dealt with today is that of the attitudes towards the partition and whether it was justified to gain peace. Most Protestants became known as Unionists as a result of their belief that Northern Ireland should keep the Union with Britain. Extreme Unionists are called Loyalists. This means that they are more likely to use violence to achieve their aims instead of Unionists which tend to use more peaceful methods. ...read more.

The IRA took a long time to decommission its weapons back in 2004, which lead most people against them, making them one of the most hates groups in Ireland. The Real IRA is a splinter group of the IRA. They broke away from the IRA because they didn't agree with the ceasefire or the Good Friday Agreement. They are well known for their cruel terrorist acts especially whilst the ceasefire was in place. The Real IRA aren't happy what they have at the moment with Northern Ireland as they want the whole of Ireland as one republic and are still continuing to cause conflict in order to obtain this. The SDLP is one of the two major nationalist parties in Northern Ireland. During the 'Troubles' (the 'Troubles' was a period of conflict involving Republican and Loyalist paramilitary organisations, political activist and civil rights groups) the SDLP was consistently the most popular Nationalist party in Northern Ireland, but since the IRA cease-fire, it has been gaining fewer votes than the main Republican rival, Sinn F�in. From the protestant religion there has also been different groups formed as a result from conflicting methods used of the two main divisions, Loyalists and Unionists. There are more individual parties who of which are mainly Protestant, rather than those that are Catholics. ...read more.

The UDA/UFF has also killed at least three Irish republican paramilitary members. The LVF is a splinter group of the UVF. The LVF was created by a man called Billy Wright, after he had been thrown out of the UVF for breaking the ceasefire. The LVF is a very extreme paramilitary group which uses only violence. One of the only parties, whom of which only use peaceful methods of persuasion to achieve their aims, is that of the UUP or the Ulster Unionist Party. UUP were once the most popular party because it represents only Unionist views. They also used to have a lot of seats at Stormont Assembly but lost them to DUP over recent years. In conclusion, the main difference between the Nationalists and the Unionists has caused Ireland to be divided into two. This division is primarily due to the English interference in Ireland in the 1600's. Further to this the issues around how the Irish people wish to be governed is paramount to the continuing conflict. This has resulted in a division between the Catholics (Nationalists) and Protestants (Unionists). The two groups have failed to resolve their problems, resulting in a rise in even more splinter groups forming because of disagreements between parties and the continuing struggle against the death toll of both Catholics and Protestants. ...read more.