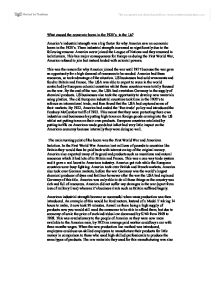 What caused the economic boom in the 1920s in the USA?

What caused the economic boom in the 1920's, in the Us? America's industrial strength was a big factor for why America saw an economic boom in the 1920's. There industrial strength increased so significantly due to the following reasons: America never joined the League of Nations and they resumed in isolationism. This has major consequences for Europe as during the First World War, America refused to join but instead traded with colonial powers. This was the reason for why America joined the war until 1917 because the war gave an opportunity for a high demand of resources to be needed. America had these resources, so took advantage of the situation. US businesses had sold armaments and food to Britain and France. The USA was able to export to areas in the world controlled by European colonial countries whilst those countries were totally focused on the war. By the end of the war, the USA had overtaken Germany in the supply of chemical products. US businesses also took the opportunity to develop new materials using plastics. The old European industrial countries took time in the 1920's to refocus on international trade, and then found that the USA had captured some of their markets. By 1922, America had ended the 'free-trade' policy and introduced the Fordney-McCumber tariff of 1922. This meant that they were protecting there own industries and businesses by putting high taxes on foreign goods coming into the US whilst not putting taxes on their own products. ...read more.

Meanwhile, other industries were expanding rapidly, with modern production techniques and electric motors taking over from steam motors. Synthetic industries also mushroomed- for example, rayon transformed the textiles industry. The American man's state of mind helped the economy boom also. Due to how the economy was flourishing the American man's perspective on how there life could be changed. Many people realised they were living in prosperity, they owned things that they originally they could only dream about. They were living the 'American dream'. The construction industry boomed as a visible sign of prosperity. For example, New York gained a new skyline where 20-storey skyscrapers were replaced by 60-story skyscrapers. Other copied what New York was doing. And as part of the American dream, there were now new marketing techniques and ways of people to pay for these products, such as hire purchase. This meant people paid a deposit and then paid off the rest in instalments. It was also very easy to borrow money from the banks at relatively low rates of interest. This led to a boom in sales, which increased demand in the factories, producing more jobs and higher wages. Development in entertainment industries became apparent when people had more money. This again reinforced the idea of 'the American dream' because people had extra money to buy things they didn't need. There were also movies, consisting of people like Charlie Chaplin. ...read more.

I expect you realise that the prices of Shares on the Stock Market depend heavily on people's confidence in the future. At its simplest - when confidence is high prices go up. When prices go up fast enough you have an economic boom. The reverse is also true. In conclusion it is clear to see that the basis of the boom was production and consumption. When America was producing and its population was consuming there was money flowing around its economy. It can be seen that the most important long-term cause of the boom was America's natural strength. This is because if America did not have its resources it would not have exported goods during the First World War and not have taken over its trade competitors� markets. The producing part of the economy would be non-existent and half of the prosperity cycle absent. It is also clear to see that the most important short-term cause of the boom was the Republican Party and their policies attitude towards business. This is because they lowered taxes and so people could spend more and they made sure people spent it on American goods. They did this by introducing tariffs making it expensive to buy foreign goods. Without this the first part of the prosperity cycle would be non-existent. The key to a boom is a country consuming and producing and these two causes largely helped this. ...read more.