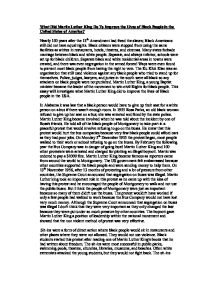 What Did Martin Luther King Do To Improve the Lives of Black People in the United States of America?

What Did Martin Luther King Do To Improve the Lives of Black People in the United States of America? Nearly 100 years after the 13th Amendment had freed the slaves; Black Americans still did not have equal rights. Black citizens were stopped from using the same facilities as whites in restaurants, hotels, theatres, and cinemas. Many states forbade marriage between black and white people. Separate, and always inferior, schools were set up for black children. Separate black and white residential areas in towns were created, and there was even segregation in the armed forces! Ways were even found to prevent most black people from having the right to vote. The Ku Klux Klan was an organization that still used violence against any black people who tried to stand up for themselves. Police, judges, lawyers, and juries in the south were all black so any attackers on black people were not punished. Martin Luther King, a young Baptist minister became the leader of the movement to win civil Rights for black people. This essay will investigate what Martin Luther King did to improve the lives of Black people in the USA. ...read more.

Although the Supreme Court announced that segregation on buses was illegal I don't think that they were very important as they only changed the law because they were put under so much pressure by other countries. The boycott gave Martin Luther King a position of leadership within the national movement and showed that the non violent method of protest was very effective. Sit-ins were a form of direct action where black people would sit in restaurants and other places where they were not allowed. They would not use violence. Black students started this protest after reading one of Martin Luther King's books that he had written about freedom. The sit-ins were most successful in public parks, swimming pools, theatres, churches, libraries, museums, and beaches. Often white extremists attacked the young students, but they would not fight back. The sit-ins showed up how wrong black segregation was. It was clearly wrong that a customer in a store could buy anything but not actually sit down at the counter to eat it. Sit-ins were said to have more effect than any court case. Martin Luther King did not 'sit-in' but his idea from his book encouraged the young black students to act, and follow his teaching by not fighting back. ...read more.

Martin Luther King's last campaign was to help the Black people in the south to register to vote. By 1965 the voting acts right was passed and three years later most Black adults had registered to vote. This campaign was important, as it was the last campaign that Martin Luther King did before he was assassinated, it was also important to the people of America because now they could choose the leader of their country. This was not the end of the story; black people in America still had to fight against low wages, poor housing, and fewer opportunities than white people. Martin Luther King had achieved a peaceful way of gaining the respect of the White people through protests and campaigns and changing laws so that Black people are treated equally. He was a very important man as he gave Black People hope for their future. Of course not all black people's problems were solved, there is still racism today but I think there always will be because everyone has an opinion. Not everyone agreed with Martin Luther King, some people followed other leaders such as Malcolm X; he used a very different method of protesting. ...read more.