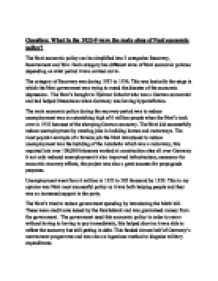 What during 1933-9 were the main aims of Nazi economic policy?

Question: What in the 1933-9 were the main aims of Nazi economic policy? The Nazi economic policy can be simplified into 3 categories Recovery, Rearmament and War. Each category has different aims of Nazi economic policies depending on what period it was carried out in. The category of Recovery was during 1933 to 1936. This was basically the stage in which the Nazi government was trying to mend the disaster of the economic depression. The Nazi's brought in Hjalmar Schacht who was a German economist and had helped Stressmann when Germany was having hyperinflation. The main economic policy during the recovery period was to reduce unemployment was an astonishing high of 6 million people when the Nazi's took over in 1932 because of the slumping German economy. The Nazi did successfully reduce unemployment by creating jobs in building homes and motorways. The most popular example of a famous job the Nazi introduced to reduce unemployment was the building of the Autobahn which was a motorway, this required ...read more.

This allowed them to get people to work longer hours and get paid less. Government was also getting money back from the taxes which it could use for rearmament which was its highest priority. To raise money for the government they used schemes in order to get in more money to help in the economy especially rearmament. They set up the Strength through Joy organisation which was cheap holidays and a car were to be won, most cruises were taken up by Nazi Party officials. The Nazis created another scheme whereby the workers could get a car. The Beetle, designed by Ferdinand Porsche, cost 990 marks this was about 35 weeks' wages for the average worker. To pay for one, workers went on a hire purchase scheme. They paid 5 marks a week into an account and at the end no-one received a car. In 1935 Adolf Hitler announced the introduction of Labour Service (RAD). ...read more.

It is usually difficult for a country to be self-sufficient like it required 6 tons of coal to produce 1 ton of oil. This economic policy cause many problems as they were many shortages in labour and raw material and prices were rising in 1939. The final category is War and Speer was in charge. At this time the war had already started and they used Blitzkrieg this was taking over foreign land and using their resources to boost your economy. In 1939 Germany took over Austria and Czechoslovakia and gained vital economic resources. They also turned the economy into a Total War economy which meant everything in the economy would be used to help in the war. I conclude by saying I truly think Nazi's economics was particularly successful as achieved majority of their economic aims. They did reflate the economy and massively reduced unemployment and to a great extent were self-sufficient. They also did rearm to a great amount and were more ready prepared than the other countries. ?? ?? ?? ?? ...read more.