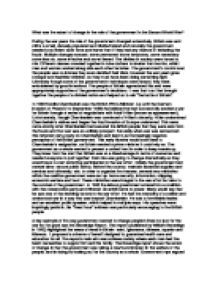 What was the extent of change in the role of the UK government in the Second World War?

What was the extent of change in the role of the government in the Second World War? During the war years the role of the government changed extensively. Britain was and still is a small, densely populated and divided island and naturally the government needed a sufficient work force and home front if they had any chance of defeating the Nazis. Multiple changes ensued, some permanent some temporary, some necessary some less so, some effective and some flawed. The divides in society were forced to mix. Different classes crowded together in tube stations to shelter from bombs, whilst men and women worked along side each other factories. The government's control over the people was so intense they even decided their diets, however the war years grew stronger and healthier children, so they must have been doing something right. Ultimately though some of the government's techniques were flawed, they were emboldened by good intentions. The people of Britain appreciated this and were appropriately supportive of the government's decisions. It was that trust that brought together the people of a divided nation and helped us to win "the battle of Britain". In 1939 Neville Chamberlain was the British Prime Minister. Up until the German invasion of Poland (1st September 1939) he believed he had successfully evaded a war for Britain through a series of negotiations with Adolf Hitler (known as appeasement). Unfortunately, though Chamberlain was convinced of Hitler's sincerity, Hitler undermined Chamberlain's wishes and began the Nazi invasion of Europe undeterred. This news came shortly after Chamberlain had assured the British people that they were safe from the Nazis and that war was an unlikely prospect. ...read more.

Rationing was implemented gradually. Starting with each household filling in a form detailing every family member. They were then issued with an identity card and a ration book containing coupons to be handed in or signed by a shopkeeper with every purchase. Lord Woolton became minister of food and governed rationing as well as overseeing a propaganda campaign to ensure that people did not waste food and grew as much of their own as possible. Though they were asking a lot of the British people they were wise to do so, rationing and food management was integral to the success of the war effort. The government knew prices would rise so by introducing the coupon system they ensured that even the poorest mouths were fed: everyone had the bare necessities. This effected people in many ways. Many turned their lawns into vegetable gardens and kept livestock in their gardens to supplement their rations. When rationing was first instigated there were 800,000 allotments, this figure almost doubled by 1943. Despite the hardships Britain was generally healthier, having an enforced balanced diet. Young children grew up healthy and fewer mothers died in pregnancy because they were given milk and orange juice. Generally people responded well, they knew it was a necessary restriction to ensure everyone's survival. The ministry of food was described as the "biggest fairest shop in the world". People were encouraged to eat healthy food to fortify them against the threat of war: "food is a weapon of war". The effect of potatoes to the war effort is debatable, but they were the poster vegetable for the rationing movement, potato propaganda boasted slogans such as "I'm an energy food". ...read more.

Film was equally useful in influencing the people. Cinema tickets were cheap, popular and readily available to the public. In 1938 980 million cinema tickets were sold. The Ministry of information used cinema as an outlet for screening short films and documentaries about coping with problems in the war, a classic demonstration of the ministry's control over public safety and perception of the war. The films themselves were equally patriotic and made battle look attractive. Lawrence Olivier's portrayal of Henry V glorified warfare and censoring out the gory reality, it was issued right before D-day to encourage people to stand together. The government's involvement in entertainment illustrated how desperate they were to control morale and keep the nation happy. They needed the workers to keep going in spite of the hardships and entertainment was the best way to do so, which was why censorship against the harsh reality of the war was often necessary. The role of the government changed extensively throughout the war years. Suddenly they had to ask more from the British people than simply their support. Those years are widely accepted as a time when Britain pulled together in spite of our differences, but recent sources show otherwise. The rich had access to better shelters and food, whilst the poor crammed into tube stations and the Government did nothing to intervene. There were multiple flaws in the Government's plans but despite all the more concealed parts of the war effort we still won, so ultimately the Government was doing more or less the right thing. They organised and rallied Britain with a precision never seen before, showing real dedication to the Nation. ...read more.