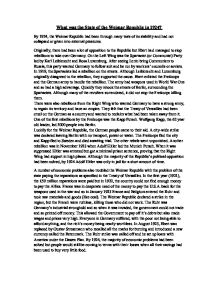 What was the State of the Weimar Republic in 1924?

What was the State of the Weimar Republic in 1924? By 1924, the Weimar Republic had been through many tests of its stability and had not collapsed or given into external pressures. Originally, there had been a lot of opposition to the Republic but Ebert had managed to stop rebellions to take over Germany. On the Left Wing was the Spartacist (or Communist) Party led by Karl Leibknecht and Rosa Luxemburg. After seeing Lenin bring Communism to Russia, this party wanted Germany to follow suit and be run by workers' councils or soviets. In 1919, the Spartacists led a rebellion on the streets. Although Leibknecht and Luxemburg originally disagreed to the rebellion, they supported the cause. Ebert enlisted the Freikorps and the German army to handle the rebellion. The army had weapons used in World War One and so had a high advantage. Quickly they retook the streets of Berlin, surrounding the Spartacists. Although many of the revolters surrendered, it did not stop the Freikorps killing them. ...read more.

In the first year (1921), the �50 million reparations were paid but in 1922, the country could not find enough money to pay the Allies. France was in desperate need of the money to pay the U.S.A. back for the weapons used in the war and so in January 1923 France and Belgium entered the Ruhr and took raw materials and goods (like coal). The Weimar Republic declared a strike in the region, but the French were ruthless, killing those who did not work. The Ruhr was Germany's industrial stronghold and so when it was invaded, the government could not trade and so printed off money. This allowed the Government to pay off it's debts but also made wages and prices very high. Everyone in Germany suffered, with the poor not being able to afford anything, and the rich's money being nearly worthless. In August 1923, Ebert was replaced by Gustav Stresemann who recalled all the marks for burning and introduced a new currency called the Retenmark. The Ruhr strike was called off and he set up loans with America under the Dawes Plan. ...read more.

By 1924, the European governments had changed and were beginning to see that Germany was a country that could be traded with and was not under a dictatorship. This was confirmed when the U.S.A. loaned some money to Germany under the Dawes Plan. Although countries were beginning to trust Germany, it is obvious that they did not trust the country fully as it was not invited to be a member of the League of Nations until 1926. However, it proves that it was starting to become a respected country again. The Treaty of Versailles caused outrage in Germany when it was published. It lost its land and territories, its industry and a large part of its army. By 1924, the problems caused by the Treaty had not been resolved as Germany was still without its colonies and territories and so it was still in the average German's mind that it had lost the war and been punished for that fact. This hindered Germany's foreign policy as it would remember when trading that it had lost iron and coal reserves as part of the treaty. ...read more.