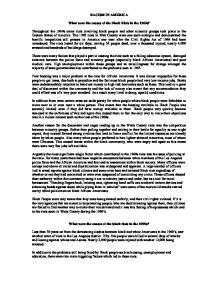 What were the causes of the Black Riots in the 1960s?

RACISM IN AMERICA What were the causes of the Black Riots in the 1960s? Throughout the 1960s many riots involving black people and other minority groups took place in the Eastern States of America. The 1965 riots in Watt County were one such example and demonstrated the horrific inequalities still present in America one year after the Civil Rights Act of 1964 had been introduced. The riots lasted for six days, leaving 34 people dead, over a thousand injured, nearly 4,000 arrested and hundreds of buildings destroyed. There were many factors that played a part in causing the riots such as a failing education system, damaged relations between the police force and minority groups (especially black African Americans) and poor medical care. High unemployment within these groups and an unwillingness for change amongst the majority of state governments also contributed to the problems seen in 1965. Poor housing was a major problem at the time for African Americans. It was almost impossible for these people to get loans, due both to prejudice and the fact most black people had very low-income jobs. Banks were understandably reluctant to hand out money to high risk borrowers such as these. This lead to a great deal of discontent within the community and the lack of money also meant that any accommodation they could afford was of a very poor standard. As a result many lived in damp, squalid conditions. In addition there were certain areas set aside purely for white people where black people were forbidden to move next to or even near a white person. This meant that the housing available to Black People was severely limited, even if they did have money available to them. Black people very quickly became annoyed at the unfairness of this and again this caused them to feel the only way to voice their objections was in a violent manner such as the riots of the 1960s. ...read more.

This is a massive contrast to the unfair and blatant discrimination of much of the police force in the 1960s. Changes for the better can also be seen in other professions and many black people are now reaching the very top of their careers. In fact, some of the highest wage earners are now black. Opera Winfrey, for example, was born in Mississippi, previously one of the most racist states in America, however thankfully times have changed and she is now one of modern America's the richest citizens. Further examples include Collin Powell, a very senior government official, Tiger Woods, World Champion golfer and Serena Williams, a famous and successful tennis player. Although there have been a lot of positive steps forward and it can be said that Martin Luther King's dream has largely been realised, sadly racism in America has not disappeared completely and there is still work to be done before his dream is fully achieved. For example there are still racially motivated attacks and even murders, some of which do still involve members of the police force. Even though racism both within institutions and by individuals has been made illegal, it is difficult to change attitudes of the past, especially in the more southerly states. If people are brought up with racism around them from an early age it can be extremely hard to change their ideas and it is only now that the next generations are being educated about racism that views about black people are starting to change. Finally, there has not yet been a black president of the United States and this perhaps reflects on the progress of society as a whole. Martin Luther King's dream as mostly been realised, however there are still finishing touches to be put in place. Of Martin Luther King and Malcolm X, who do you think was the more successful in their approach to improving the lives of American Americans today? ...read more.

Black People have exactly the same rights as any other America citizen; all attend school and are entitled to vote. In addition, some of the most famous and influential people in America are African American and this signifies a major change in the attitudes of the vast majority of America. On October 6 '2003 the American top 10 singles chart was made up entirely of black artists for the first time ever. For an artist to be number one, or indeed in the top ten, he/she must have almost the entire support of the public and this is a big achievement for black African Americans. It shows that at the present time they are fully accepted in society and for this to happen peoples' attitudes must have changed. It is difficult to predict what may happen in the future. Some people believe that Black leaders may be returning to the idea of "Black Power", however I do not believe that this is the case. I think that as time moves, racism will become less and less of an issue, but will never disappear completely. There will always be certain people in society who take in upon themselves to single out and pick on others, and just as a bully in a school may pick on someone different, racists will continue to discriminate against black Americans because of the colour of their skin. This however will become less prominent every year. To sum up, I do not believe that past events and attitudes have a very significant influence on peoples' attitudes today. People look back on mistakes of the past and use them as a reminder not to allow anything similar to happen again, and in my opinion this is how most people in America regard racism. Education has meant that children are now taught about racism, and with every new generation the current attitude that black people are equal is strengthened. There are of course a minority who choose still to discriminate against African-Americans; however this is nothing like as widespread as it used to be. ...read more.