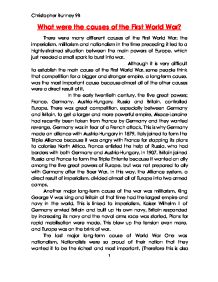 What were the causes of the First World War?

What were the causes of the First World War? There were many different causes of the First World War: the imperialism, militarism and nationalism in the time preceding it led to a highly-strained situation between the main powers of Europe, which just needed a small spark to burst into war. Although it is very difficult to establish the main cause of the First World War, some people think that competition for a bigger and stronger empire, a long-term cause, was the most important cause because almost all of the other causes were a direct result of it. In the early twentieth century, the five great powers: France, Germany, Austria-Hungary, Russia and Britain, controlled Europe. There was great competition, especially between Germany and Britain, to get a larger and more powerful empire. ...read more.

This is linked to imperialism. Kaiser Wilhelm II of Germany envied Britain and built up his own navy. Britain responded by increasing its navy and the naval arms race was started. Plans for rapid mobilisation were made. This blew up the tension even more, and Europe was on the brink of war. The last major long-term cause of World War One was nationalism. Nationalists were so proud of their nation that they wanted it to be the richest and most important. (Therefore this is also linked to imperialism because nationalists wanted their countries to have the biggest empires.) Such strong feelings made countries very aggressive towards each other and quite unforgiving if their nation had been offended. It was this nationalism which encouraged Gavrilo Princip, a Serb, to shoot dead Archduke Ferdinand, the heir to the Austrian throne. ...read more.

The war had started. In 1914, Germany had decided that an all out European war was inevitable and the longer they held out, the less chance they had of winning. So they presented a 'blank cheque' to Austria-Hungary to give them their full support. The Schlieffen plan ensured that Russia, France and almost certainly Britain would be drawn into fighting. In conclusion, the most important cause in many people's eyes is the Triple Entente of Britain, France and Russia and the Triple Alliance of Italy, Germany and Austria-Hungary because this made Europe divided into two camps which would attack Germany on two fronts. Also the Schlieffen Plan is a major cause because it drew Britain, France and Russia into the war because of the Triple Entente and past treaties which the countries had signed, for example, the Anglo-Belgian alliance, which meant that Britain had to help Belgian if they were invaded, which they were. ?? ?? ?? ?? Christopher Bunney 9B 1 ...read more.