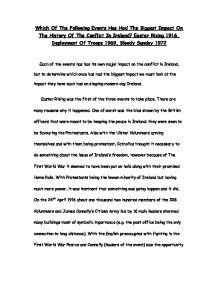 Which Of The Following Events Has Had The Biggest Impact On The History Of The Conflict In Ireland? Easter Rising 1916, Deployment Of Troops 1969, Bloody Sunday 1972

Which Of The Following Events Has Had The Biggest Impact On The History Of The Conflict In Ireland? Easter Rising 1916, Deployment Of Troops 1969, Bloody Sunday 1972

Each of the events has had its own major impact on the conflict in Ireland,

impact they have each had on shaping modern day Ireland.

Easter Rising was the first of the three events to take place. There are

many reasons why it happened. One of worst was the bias shown by the British

officers that were meant to be keeping the peace in Ireland; they were seen to

be favouring the Protestants. Also with the Ulster Volunteers arming

themselves and with them being protestant, Catholics thought it necessary to

do something about the issue of Ireland’s freedom, however because of The

Home Rule. With Protestants being the known minority of Ireland but having

much more power, it was imminent that something was going happen and it did.

many buildings most of symbolic importance (e.g. the post office being the only

connection to long distance). With the English preoccupied with fighting in the

to plan an uprising. This was never planned to work it was merely the creation of

replied “we are going to be slaughtered”. After the event which took a week, all

sixteen leaders were shot dead. One of the worst consequences to come from

this event was in fact its main aim to create Martyrs, James Connelly and

in the event. The creation of these Martyrs led to the yearly celebration of

their deaths, which in turn led to Protestants rebelling and celebrating their

their faith as he punished Catholics. This then led to a lot more violence

send the Black and Tans in, to control the violence. Another serious consequence

were shot. They rose with anger and this was a major factor in the IRA being

Ireland as the IRA were a catholic terrorist organisation which believed

violence was the answer to their problems. The IRA soon became out of control

the events. The relationship between England and Ireland took a big hit with the

violence increased to extreme levels, this was also another reason why Lloyd

deference, the Prime Minister desperate to find an end to the Irish conflict,

Tyrone, Armagh, Down, Antrim and Londonderry became officially known as

Northern Ireland. However all of these counties had a significant percentage of

led to more violence within the counties. With their martyrs shot Catholics were

encouraged to join group such as the Irish Volunteers, and with this new rise in

Catholic popularity many Protestants join their own version of the Irish

volunteers such as the UVF (Ulster volunteer force). With these two parties

fighting for opposite sides there was once again heavy violence in Ireland, this

winning seat in West Minster which they refused. Refusing the seats seemed to

their cause or cooperate with the British, also in 1919 Sinn Fein declared

island of Ireland to be independent from the British Empire, so refusing the

seats cut their ties with England. By this time the Protestants were getting so

UVF and many similar parties making the violence increase even more. The last

next. All The Easter Rising’s consequences had their impact on shaping modern

in 1919, the sheer violence this group brought to Ireland was unimaginable and

was formed, the terror they brought to people daily life in Ireland in the

were needed to join the IRA increased, in turn the deaths of British soldiers

increased this meant a lot of violence both in Northern Ireland and England,

knowing if going to the corner shop would be the last thing they ever did. In the

that opportunity, but then again what impact is bigger than splitting the country

we split people, connections and allies, this still has a big  impact in the present

day, as there is still violence in Northern Ireland. On-The-Other-Hand the least

worth the issue went away with minimal repercussions. David Lloyd George’s

himself, as the saying goes you can’t fight fire with fire, David Lloyd George

seemed to have tried and lost.

The Deployment of the troops, seemed like the perfect solution, send the

troops in to control the violence, as it was escalating and needed to stopped, a

protestants on to re-form the UVF leading to the death of this boy. Also the

(violent groups). So sending the troops in would make Ireland a safe place to

live, and make England’s life easier, and that work for a short time to. Until

disaster struck in the form of the IRA splitting, forming the provisional IRA

violent enough to make things happen, this was a big problem because it meant

was excessive, these attacks lost innocent lives and caused protestants to

retaliate bringing more violence. From 1969 until 1997, the Provisional Irish

and endangering countless lives. The Majority of the violence happened after

this, the troops just being there made the IRA attack them as the IRA felt

that this was their country and England should not be in control. To try and stop

this violence the troops searched catholic homes looking for everything from

weapons to hidden members of the IRA, which again angered the IRA and it just

continued. The provisional IRA bombing the troop made them a lot more popular

Ireland, and led them to declare them self the protectors of the Catholics, with

into the country. Even with the Provisional IRA the troops continued to search

also brought with them something else, Interment (The act of placing a person

in prison. This naturally led to bloody Sunday (As this was a match against

internment). Bernadette Devlin (a member of the people’s Democracy) said that

while. The decision to send to send the troop into Ireland was down to Harold

Wilson, who at first ignored the situation in Ireland which showed Ireland and

minister of Ireland)to improve the discrimination against Catholics in N. Ireland.

privileges to protestants and just generally showing there like for protestants

and dislike for Catholics. Not to go as far as saying they were biased but they

seemed to favour the Protestants. To most people’s opinion the deployment of

troops is the lesser of the three evils but this affected every ones daily lives,

me that has much more of an impact than an event that lasted a day. The

ending battle are going through will never go away. The most important of the

spurred on all the violence and were at the centre of most, and educating young

generations of violence. The least important has to be Internment even though

this directly led to bloody Sunday and rendered many innocent people in prison,

mildest. The troop’s impact was mainly that the continued and escalated the

violence being one half of an endless number of fights. Damage to people and

found the money for repairs hospital fees and so on.

The last of the events Bloody Sunday is the most controversial, and some

of the events are not known truly today. There are many reasons why bloody

occurred because of internment. Internment its self boosted support for the

IRA because they tried to do everything in their power to stop it; they even

helped residents make barricades to keep the troops out. However this allowed

Ireland formed the UDA (Ulster Defence Association) which responded to the

the violence in Ireland once again escalated. So, marching against internment

and even the IRA’s attacks on England. It all began with a peaceful march

against internment that started in Londonderry it had at least 15,000 people all

ignoring the ban the troops had put on marching. The march was going peacefully

started up an argument with the troops. One thing led to another and the

civilians started throwing stones and the troops started shooting with

of 13 people. An investigation into what happened, took place and the official

report said the troops were innocent. Although the queen herself gave praise to

the troops for killing these people, there is still currently a re-investigation

bring back would bring “the troubles” to the present day. The death of so many

they saw it as the only way to remove the troops. This meant an increase in

violence as the IRA then went on the attack; there was more terrorism, more

leadership and guidance, forcing people to again turn to terrorism for answers.

arguing that never could be resolved so the Northern Ireland assembly

collapsed, having resoled little to nothing. The US increased their funding to

fight with the troops. That also meant there was an increase in attacks on

England e.g. Harrods and on Margaret Thatcher, England fought back by sending

in yet more troops which again led the IRA to attack. In my opinion the situation

making a decision on who was at fault here, by saying that the troops were right

community. The most important consequences in this event has to be the

suspending of Stormont, after the event took place the British applied direct

Westminster. This is the most important as Catholics and especially the IRA

effectively because who can do what’s right if they can’t see what’s wrong?  The

least Important has to be the dissolving of the B-specials, as this didn’t have a

took over the job of protecting the people. Overall Bloody Sunday hit the people

but England, which placed the English government in a difficult position as now

they had to please not on northern Ireland but their own nation.

The most important to me was the deployment of the troops. It may seems

to some the least catastrophic, but this didn’t end after a day or a week it

couldn’t go shopping for fear there would be a nail bomb inside, a lot of innocent

time. The Vicious circle of violence that occurred, with the troops there the

that were killing normal people. This forced the troops to search homes meaning

the Catholics who own the homes were under scrutiny, injured if they denied

Internment. It’s had the most impact on the modern day Northern Ireland as

have lost love ones to the troops attacks. This was the only consequences that

there was conflict between the Catholics themselves, people were punished by

their own parties for being civilized towards the situation. Also if the troops

were never sent in it’s unlikely that there would have ever been a bloody Sunday.

Although many think the others had the most impact, Easter rising did so much

damage, but in the long run its amount of long term consequences is significantly

less than the other two events. Also Bloody Sunday is still very controversial so

absence of the truth from this situation it seems to have been inflamed.

meaning it made minimal lasting damage to modern day Ireland. Nevertheless I

would say that the most damage made to Ireland was plantation, if this had

in places of power and unable to take away catholic rights.