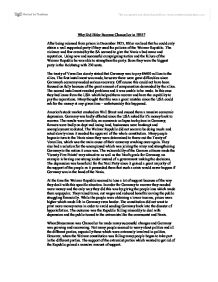 Why did Hitler become Chancellor in 1933

Why Did Hitler Become Chancellor in 1933? After being released from prison in December 1925, Hitler realised that he could only obtain a well supported party if they used the policies of the Weimar Republic. The violence and fear created by the SA seemed to give the Nazis a bad name and reputation. Using new and successful campaigning tactics and the failure of the Weimar Republic he was able to strengthen the party. Soon they were the biggest party in the Reichstag with 230 seats. The treaty of Versailles clearly stated that Germany was to pay �6600 million to the allies. The first installment was made, however there were great difficulties since Germany's economy needed serious recovery. Off course this could not have been focused on fully because of the great amount of compensation demanded by the allies. The second installment resulted problems and it was unable to be made. In this case they had loans from the USA which helped them recover and have the capability to pay the reparations. Many thought that this was a great mistake since the USA could ask for the money at any given time - unfortunately this happened. America's stock market crashed on Wall Street and caused them a massive economic depression. ...read more.

The Nazis also promised to destroy the Communists which gained the trust and support of many people. The Nazis used many effective tactics and methods in order to maintain their high percentage of support to win more votes and support of the German public. Hitler reorganised the party, made it more flexible so it would be more acceptable, promised voters of a better life, modernised the party and had lots of propaganda around the country. However the most capturing aspect of the Nazi was Hitler's speeches, this gained the majority of the support. In the early years of the Nazi Party, Hitler had the SA involved in many street battles between communists and other opponents. This fear seemed to have many people dislike the party and vote for others. Hitler reorganised the party so it is less violent and is not seen fighting on the streets as often as before. Lots of propaganda was used in order to gain supports. The Nazis scared people about the communists and the way they would want Germany to be ruled. They frightened the farmers and Business owners by claiming that communists will talk away their winnings and their land. They went on about the helplessness of Germany because of the Treaty of Versailles's existence. ...read more.

Later in January, Von Papen organised a meeting with Hindenburg and Hitler to make an agreement. They agreed to appoint Hitler Chancellor. By late January 1933 Hitler was Chancellor. Hindenburg and Von Papen decided to appoint Hitler as Chancellor since he was liked in great amounts and the Reichstag would surely support him as most of the seats were filled with Nazis. Von Papen would be Vice Chancellor and would be able to keep a good eye on him. The cabinet only had 4 Nazis and the rest were supporters of Von Papen and Hindenburg. With Hitler between the both of them and with a small number of Nazis in the cabinet, they thought that Hitler would be easily controlled and the Reichstag would have quick and effective solutions for their problems However, they were extremely wrong. Hitler was able to get support and strengthen his party by several events. The depression and weakness of the Weimar Republic did not do German citizens any good; however this was an advantage to Hitler since he was able to show the public the importance of his aims and they agreed with his strategies. Without their effective and successful tactics Hitler would not have been leading the most supported party in Germany. Without his tactics he would have never appointed Chancellor even if it was political maneuvering or keeping him in control. Without these events Hitler would probably have never been Chancellor by 1933. ...read more.