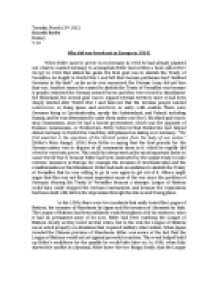 Why did international peace collapse in 1939?

﻿Tuesday, March 13th, 2012 Ricardo Roche History Y-10 Why did war break out in Europe in 1939? When Hitler came to power in in Germany in 1933 he had already planned out what he wanted Germany to accomplish. Hitler had written a book called Mein Kampf, in 1924 that stated his goals. His first goal was to abolish the Treaty of Versailles, he fought in World War I and felt that German politicians had ?stabbed Germany in the back?, as far as he was concerned, the German Army did not lose that war. Another reason he wanted to abolish the Treaty of Versailles was because it greatly restricted the German Armed Forces and they were forced to demilitarise the Rhineland. His second goal was to expand German territory since it had been deeply limited after World War I and believed that the German people needed Lebensraum, or living space, and Anschluss, or unity, with Austria. There were Germans living in Czechoslovakia, mostly the Sudetenland, and Poland, including Danzig, and he was determined to unite them under one Reich. His third goal was to stop communism, since he had a fascist government, which was the opposite of Russian communism, or Bolshevism. Hitler believed that Bolsheviks had helped defeat Germany in World War I and they still planned on taking over Germany. ...read more.

?If the French had taken any action we would have been easily defeated? (Hitler speaking of the German march into the Rhineland) Hitler had no intention on fighting French troops in the Rhineland, as shown in the source, which is why he sent his army with the instruction of retreating if faced with any opposition. If the French had opposed to Germany, Hitler would have been greatly humiliated in Germany and abroad since may German generals were still uncertain about him. This factor could be the most important one to cause World War II since the military intervention from Britain and France would have stopped Germany early on instead of declaring war once they were already more powerful. ?They could have suppressed us but they let us through the danger zone. (?) They left us alone and let us slip through the danger zone. And when we were done, and well armed, better than they, then they started the war!? (Goebbels, a member of Hitler?s government, speaking to German journalists, April 1940) This source is evidence to the fact that Britain and France could have prevented the war if they had just reacted to the German threat, coming from an important member of Hitler?s government. ...read more.

Hitler had taken his gamble on step too far by invading Poland instead of just keeping what he already had. ?By surrendering to force, Chamberlain has encouraged aggression? our central contention, therefore, is that Mr Chamberlain?s policy [of appeasement] has throughout been based on a fatal misunderstanding od the psychology of a dictatorship.? (The Yorkshire Post, December 1938) This source can be interpreted as true in the sense that the policy of appeasement was making Hitler take larger gambles every time and that Chamberlain had misjudged Hitler?s character. However, the source could be interpreted as incorrect since appeasement was justified at the time, and it was based on Britain and France?s desire to ensure peace and avoid war, and not Chamberlain?s misjudgement of Hitler as stated in the source. In the end, if Britain and France had never adopted the policy of appeasement, the war was likely to have been avoided and international peace would have been ensured. And if Britain and France had not ended appeasement that way that they did, war would have also been evitable. Appeasement made Hitler go too far and would make him think no one dared stop him, which encouraged him to go further every time until his gamble went too far and appeasement ended, war was declared, and international peace collapsed in 1939. ...read more.