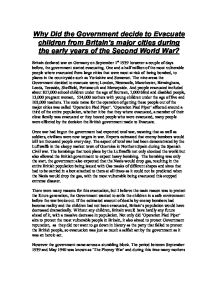 Why did the Government decide to evacuate children from Britains major cities during the early years of the Second World War?

Why Did the Government decide to Evacuate children from Britain's major cities during the early years of the Second World War? Britain declared war on Germany on September 1st 1939 however a couple of days before, the government started evacuating. One and a half million of the most vulnerable people where evacuated from large cities that were most at risk of being bombed, to places in the countryside such as Yorkshire and Somerset. The nine areas the Government decided to evacuate were; London, Newcastle, Manchester, Birmingham, Leeds, Teesside, Sheffield, Portsmouth and Merseyside. And people evacuated included about 827,000 school children under the age of fourteen, 7,000 blind and disabled people, 13,000 pregnant women, 524,000 mothers with young children under the age of five and 103,000 teachers. The code name for the operation of getting these people out of the major cities was called 'Operation Pied Piper'. 'Operation Pied Piper' affected around a third of the entire population, whether it be that they where evacuated, a member of their close family was ...read more.

Not only did 'Operation Pied Piper' aim to protect the most vulnerable people in Britain, it also aimed to protect Government reputation, as they did not want to go down in history as the party that failed to protect the British people, so evacuation was just as much a selfish act by the government as it was an heroic act. However the government came across a stumbling block. The period between September 1939 and May 1940 was known as 'The Phoney War' and during this time many mothers started to bring their children back from their evacuated destinations. This was because during this period, no bombing occurred and to some, it looked as though the war was not going to happen. Consequently the government had to launch another propaganda campaign to persuade mothers to evacuate their children. Because of the threat of Blitzkrieg (lightning war) the British government knew it was best to have the children away from it all. ...read more.

When poor children from the cities were evacuated they often couldn't believe what they saw. Most of them were amazed by indoor toilets and the food put on the table. Some evacuees were so poor they couldn't even afford a toothbrush. As much as the Evacuees were amazed at how rich the hosts were, the hosts were just as amazed at how poor the evacuees were. Not all evacuees were poor but most host families had a prejudice that all evacuees were poor. While children from the cities were out in the countryside their schools were being used as emergency canteens or shelters for the people left homeless by the war. As you can see, evacuation was in everyone's best interests, even if it was hard sending your children away to strangers. Evacuation sent the most vulnerable people away to protect them, also without evacuation there may have been a very small population of the future generation. Although one of the main reasons was to protect government reputation, Evacuation saved many lives of vulnerable civilians. So ultimately, that is why the Government decided to evacuate! ?? ?? ?? ?? ...read more.