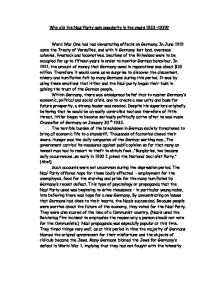 Why did the Nazi Party gain popularity in the years 1933-1939? Word War One had had devastating effects on Germany. In June 1919 came the Treaty of Versailles, and with it Germany lost land, overseas colonies, livestock and locomotives. Sections of the Rhineland were to be occupied for up to fifteen years in order to monitor German behaviour. In 1921, the amount of money that Germany owed in reparations was about $33 million. Therefore it would come as no surprise to discover the discontent, misery and humiliation felt by many Germans during this period. It was by using these emotions that Hitler and the Nazi party began their task in gaining the trust of the German people. Within Germany, there was widespread belief that to master Germany's economic, political and social crisis, and to create a new unity and base for future prosperity, a strong leader was needed. Despite his superiors originally believing that he would be an easily controlled tool and therefore of little threat, Hitler began to become seriously politically active after he was made Chancellor of Germany on January 30th 1933. The terrible burden of the breakdown in German society threatened to bring all economic life to a standstill. ...read more.

By 1939 this had risen to 47. But the Germans were oblivious to the fact; they were just grateful to be out of unemployment. However, although unemployment virtually vanished, it was the figures that changed rather than the number of unemployed. Hitler's policy only applied to his recognition of 'real Germans'. Therefore people such as Jews and those in concentration camps were kept from the unemployment register. Women were also encouraged to leave work in order for men to have more chance of employment and for them to concentrate their efforts on creating large families. Figures were also distorted in the way that part-time work was recorded as full-time work. The conscription policy of 1933 resulted in thousands of men joining the military. Withholding this information made the new German government look intelligent and efficient. Consequently it is not surprising to learn that the German army grew from 100,000 men in 1933 to 140,000 in 1939. Huge sums of money were spent on this venture, as unknown to the average man, Hitler was plotting a massive military revenge. Hitler's idealistic policy can be seen through the wage scheme that was introduced whilst he was in power. ...read more.

The event was used to impress the world with the comeback that the Germans had made. The stadium was enormous; it held 110,000 spectators. The event was filmed in such a manner as to make Germany look fantastic. Although anti-Jewish signs were removed to invoke a 'friendly atmosphere', Hitler still showed his racist side when he refused to shake hands with gold medallist Jesse Owens - a black American. Examples of Hitler's fascination with race and superiority can be seen in the generous social security benefits that the Nazi Party granted. These included free loans and marriages. If couples did have a loan they could often clear it by having numerous children. Hitler wanted these children to become the future super race - Hitler Youth. Women were also entitled to medals for having a certain number of children who would then contribute to the Hitler Youth. To gain the gold medal on Hitler's mother's birthday, a woman had to have eight children. It is therefore clear to see why the Nazi Party gained immense popularity during the years 1933-1939. For the average German, until war broke out this was the best life that they had known. They had jobs, food, they had recovered their pride and they were having a good time. This pro government this The ...read more.