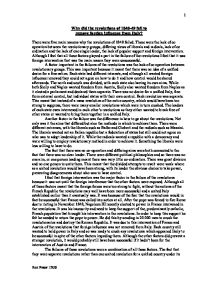 Why did the revolutions of 1848-49 fail to remove foreign influence from Italy?

Why did the revolutions of 1848-49 fail to remove foreign influence from Italy? There were five main reasons why the revolutions of 1848 failed. These were the lack of co operation between the revolutionary groups, differing views of liberals and radicals, lack of co ordination and the lack of one single leader, the lack of popular support and foreign intervention. Although I feel that all these factors played a part in the failure of the revolutions I feel that it was foreign intervention that was the main reason they were unsuccessful. A factor important in the failures of the revolutions was the lack of co operation between revolutionary groups. This was important because it meant that there was no idea of a unified desire for a free nation. Each state had different interests, and although all wanted foreign influence removed they could not agree on how to do it and how control would be shared afterwards. The north and south was divided, with each state also having its own aims. ...read more.

While the radicals wanted a republic with a democracy and were willing to employ revolutionary method in order to achieve it. Something the liberals were less willing to have to do. The fact that there was no co-operation and differing aims were both connected to the fact that there was no clear leader. There were different political philosophies and so there was no one aim, or one person leading meant there was very little co-ordination. There was great division and no one person to unite them. This meant that the divided attempts to revolt were weak where as a united revolution would have been strong, with its leader the obvious choice to take power, preventing disagreements about who was to have control. I feel that foreign intervention was the major factor in the failure of the revolutions because it was not until the foreign interference that the other factors were exposed. Although all of these factors meant that the foreign forces were too strong to fight, without the actions of the French Republic the revolutions may well have been more successful and a united Italy established earlier than it eventually was. ...read more.

The failures of these revolutions were a combination of all these factors. The fact that they were separate revolutions rather than one united revolution for a unified country under its own control was a major reason but the most significant reason was the intervention from outside of Italy. It was this that meant that when a revolution was successful in spite of the many obstacles they faced, they were crushed before they could gain more support and possibly spread to become a more unified revolution for Italy. If there had been no foreign intervention the revolutions would have been successful. They may not have brought about unification, but each state would have been in its own control without foreign influences, which was the aim of the revolutions. It was foreign intervention that thwarted this. This was because Austria knew the wealth that was available for them in the growing economy of Italy, and was unwilling to give it up. With the French supporting the pope as well this meant that the revolutions were destined to fail. 1 Roz Fraser 12GS ...read more.