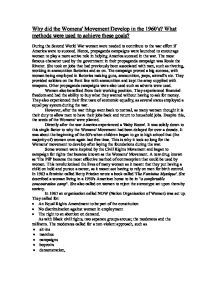 Why did the Womens' Movement Develop in the 1960's? What methods were used to achieve these goals?

Why did the Womens' Movement Develop in the 1960's? What methods were used to achieve these goals? During the Second World War women were needed to contribute to the war effort if America were to succeed. Hence, propaganda campaigns were launched to encourage women to play a more active role in helping America succeed in the war. The most famous character used by the government in their propaganda campaign was Rosie the Riveter. She took on jobs that had previously been associated with men, such as riveting, working in ammunition factories and so on. The campaign proved a big success, with women being employed in factories making guns, ammunition, jeeps, aircraft's etc. ...read more.

It was about the beginning of the 60's when children began to go to high school that (the majority of) women once again had free time. This is why it took so long for the Womens' movement to develop after laying the foundations during the war. Some women were inspired by the Civil Rights Movement and began to campaign for rights that became known as the Womens' Movement. A new drug known as 'The Pill' became the most effective method of contraception that could be used by women. This revolutionised the lives of many women as it meant that they put having a child on hold and pursue a career, as it meant not having to rely on men for birth control. ...read more.

One of these extremist movements were called SCUM (Society for Cutting Up Men) who supported the use of violence against men. Other targets of the Movement were to stop the treatment of women as sex objects, as they argued that women were judged on their appearance rather than their abilities. Therefore they disrupted beauty pageants and campaigned against pornography. Overall, women achieved a great deal of progress in a short amount of time. Many states adopted the ERA (Equal Rights Amendment) and an increasing number of women gained equal employment and pay rights. There was an increase in feminist magazines and women made progress in media such as television and radio. In the 1980's a woman ran for the Democratic vice-presidential election, though we have yet to see a woman President. ...read more.