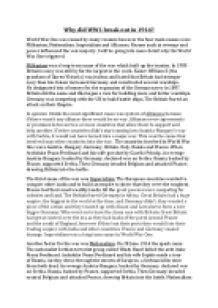 ﻿Why did WW1 break out in 1914? World War One was caused by many reasons however the four main causes were Militarism, Nationalism, Imperialism and Alliances. Reason such as revenge and power influenced the war majorly. I will be going into more detail why the World War One triggered. Militarism was a long-term cause of the war which built up the tension. In 1900 Britain?s navy was still by far the largest in the work. Kaiser William II (the grandson of Queen Victoria) was jealous and hated that Britain had stronger navy than his. Kaiser increased Germany and constructed several warships. He designated lots of money for the expansion of the German navvy in 1897. Britain did the same and this began a race for building more and better warships. ...read more.

Russia, backed by France, supported Serbia. Then Germany invaded Belgium and attacked France, drawing Britain into the battle. The third cause of the war was Imperialism. The European countries wanted to conquer other lands and to build an empire to show that they were the toughest. France lost their most wealthy lands. All the great powers were competing for colonies and land. The British feared Germany in Africa. Great Britain had a huge empire, the biggest in the world at the time, and Germany didn?t, they wanted a piece of the action and they teamed up with Alsace and Lorraine to form a new bigger Germany. Who went on to have the Arms race with Britain. Great Britain had great control over the sea as they had loads of the ports around France and the south of England, however if they lost their ports they would lose their trading empire with India and other countries. ...read more.

The Serbians and the Bosnians wanted to become one country due to their similarities and they agreed to assist one another in the event of war. In 1882, Germany, Italy and Austria-Hungary formed an alliance, called the Triple Alliance, capable to protect each other in the World War One. In 1904, Britain joined France in the similar alliance. They were joined by Russia in 1907 to form the Triple Entente. Nationalism was an important cause. In conclusion, the long term causes were militarism, imperialism, alliance and nationalism. The short term cause was when the Archduke Franz Ferdinard and Sophie were shot by Gavrilo Princip and Austria-Hungary declared war on Serbia. I have given several of reasons above why WW1 broke out in 1914. The most important four reasons that war broke out in 1914 are underlined. ...read more.