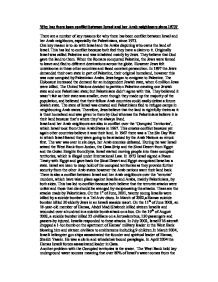 Why has there been conflict between Israel and her Arab neighbours since 1973?

Why has there been conflict between Israel and her Arab neighbours since 1973? There are a number of key reasons for why there has been conflict between Israel and her Arab neighbours, especially the Palestinians, since 1973. One key reason is to do with Israel and the Arabs disputing who owns the land of Israel. This has led to conflict because both feel they have a claim to it. Originally Israel was called Palestine and was inhabited mainly by Jews. They believe that God gave the land to them. When the Romans conquered Palestine, the Jews were forced to leave and fled to different destinations across the globe. However Jews felt unwelcome in these other countries and faced constant persecution. In 1897 the Jews demanded their own state in part of Palestine, their original homeland, however this was now occupied by Palestinian Arabs. Jews began to emigrate to Palestine. The Holocaust increased the demand for an independent Jewish state, when 6 million Jews were killed. The United Nations decided to partition Palestine creating one Jewish state and one Palestinian state; but Palestinians didn't agree with this. They believed it wasn't fair as their state was smaller, even though they made up the majority of the population, and believed that their fellow Arab countries could easily defeat a future Jewish state. ...read more.

On the 19th of August 2003, a suicide bomber killed 22 civillians on a Jerusalem bus, 130 passengers and passers-by injured. Israelis responded to these attacks. In July 2002, Israel F16 aircraft dropped a 1-ton bomb on the apartment of Hamas' military leader in the West Bank blowing him and sixteen civilians to smithereens including 9 children.In March 2004, Israeli helicopter gun ships assassinated the founder and spiritual leader of Hamas, Sheikh Yassin. He was a cleric and wheelchair bound paraplegic. In April 2004 the Hamas Israeli forces assassinated leader in Gaza. Another problem with the Occupied territories is the water. The West Bank held key underground water sources meaning that over 80% of Israel's water comes from the West Bank. If they gave up the West Bank there would be a serious water shortage in Israel and they would have to look elsewhere for water or leave. Jerusalem is another area of conflict between the Israelis and Palestinians. It is the holy city for both Muslims and Jews. For Muslims, it was visited by the Prophet Muhammad and for Jews it was King David's City. Neither Jew nor Muslim can accept the other ruling it, which means there is constant conflict over it. Palestinians and other Arabs want Jerusalem to become the capital of a new Palestine however it is doubtful that Israel will ever accept this. ...read more.

The three main goals were the eradication of what it viewed as Western colonialism in Lebanon, the bringing to justice of those who committed atrocities during the war, and establishing an Islamic government in Lebanon. Hezbollah has popular support in Shi'a Lebanese society and has organised demonstrations of hundreds of thousands. Hezbollah also receives arms, training, and financial support from Iran. Hezbollah, which started only with a militia, has grown to an organization which has seats in the Lebanese government, a radio and a satellite television station, and programs for social development. Because of the lack of communication between these to groups and the refusal to cooperate this contributes to preventing peace between the Arabs and Israelis. To conclude, the major reason for why there is conflict and attempts to develop a peace process since 1993 is Israel's refusal to give back the occupied territory that isn't rightfully theirs in the first place, even though they need it for a comfortable living. However if they could survive without it for years before why do they need it all of a sudden. I also believe that if the state of Israel had never been created then the situation would not be as bad as it is now. I think that they could have both coexisted in Palestine peacefully if the Jews had never decided to take over as I think it was unfair of them to force the Palestinians to leave their homes. ...read more.