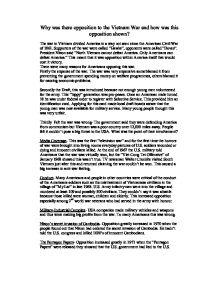 why the USA withdrew its forces from Vietnam in 1973

Why was there opposition to the Vietnam War and how was this opposition shown?

The war in Vietnam divided America in a way not seen since the American Civil War of 1861. Supporters of the war were called “Hawks”, opponents were called “Doves”. President Nixon said “North Vietnam cannot defeat America. Only Americans can defeat America.” This meant that it was opposition within America itself that would cost it victory.

There were many reasons for Americans opposing this war.

Firstly the expense of the war. The war was very expensive some blamed it from preventing the government spending money on welfare programmes, others blamed it for causing economic problems.

Secondly the Draft, this was introduced because not enough young men volunteered for the army. This “hippy” generation was pro-peace. Once an American male turned 18 he was under federal order to register with Selective Service. This provided him an identification card. Applying for this card made local draft boards aware that the young man was now available for military service. Many young people thought this was very unfair.

Thirdly  Felt the war was wrong- The government said they were defending America from communism but Vietnam was a poor country over 12,000 miles away. People felt it couldn’t pose a big threat to the USA. What was the point of their involvement?

Media Coverage- This was the first “television war” and for the first time the horrors of war were brought into living rooms everyday pictures of U.S. soldiers wounded or dying and innocent civilians killed. At the end of 1967 the U.S. military told Americans that the war was virtually won, but the “Viet Cong Tet Offensive” of January 1968 showed this wasn’t true. TV newsman Walter Cronkite visited South Vietnam just after this and returned claiming the war couldn’t be won. This caused a big increase in anti-war feeling.

Conduct- Many Americans and people in other countries were critical of the conduct of the Americans soldiers such as the mistreatment of Vietnamese civilians in the village of “My Lai” in late 1968. U.S. Army infantrymen went into the village and murdered at least 109 and possibly 500 civilians. They couldn’t say it was a battle because those killed were woman, children and elderly. This increased opposition especially among 2nd world war veterans who had served in the army with honour.

Military-Industrial Complex- USA companies made military vehicles and weapons and thus were making big profits from the war. To many Americans this was wrong.

The Pentagon Papers- Opposition increased greatly in 1971 when the “Pentagon Papers” were released they showed that the U.S. government had lied to the U.S. people. They accused the North Vietnamese of attacking U.S. ships in the Golf of Tonkin in August 1964. This incident never actually happened.

Defeatism- When there was still no sign of victory after several years of fighting and thousands of causalities many people became defeatist and amused it was impossible to win.

American baby boomers were becoming adults at the same time the U.S. was becoming involved in Vietnam. These young people were becoming more rebellious and critical of authority. These young “hippys” weren’t concerned about war but more concerned about making love. The more they saw of the Vietnam War on TV as shown by broadcasters like Walter Cronkite the less they liked it. So they began to protest. As there was so many of them they couldn’t fail to be noticed. This happened during a time of unprecedented student activism. These protest eventually culminated in protests against the war.

One protest worth mentioning accrued at the universality of Michigan in March 1965. Some Michigan baby boomers became advocates of peace politics they joint teachers in skipping classes and speaking out about what they felt about what was happening in Vietnam. This new left wing politics spread like wild fire from one campus to another. Being a radical and being against the war became synonymous. Their protest gained momentum with the introduction students began to defy orders to register with Selective Service. Some protested publicly by burning their draft cards and received various punishments. The first person prosecuted for this offence was David J Miller. The first anti-war teach-in was held in the capital on the 15th May 1965 it attracted several thousand protesters. From then on crowds grew to the point that by 1970 several hundred thousand filled the streets to try and stop the war. Every time more soldiers were sent to Vietnam there was an increase in anti-war movement. At these protest they chanted sayings like “Bring our boys home” “make love not war” “stop the killing now” and “LBJ, LBJ! How many kids did you kill today?.” There was also many anti-war songs eg. Bob Dylan- The time they are a changin’. Vietnam Veterans also marched against the war hundreds though away their campaign medals in protest. One Vietnam veterans called Ron Kovic who had badly wounded and was paralysed from the waist down and who actually had his life story made into a film called “Born on the 4th of July.” “Vietnam Veterans Against the war” was formed.

Serious riots occurred in many towns and cities. During a protest at Kent State University in Ohio in 1970 a student was shot dead and in Chicago in 1968 at the Democratic National Convention they were protecting against pro-war candidates. Hundreds were injured as rioters fought with armed police. By 1971 opposition had even spread to the armed forces in Vietnam. They had no clear idea of their mission. The anti-war feeling was most noticeable among junior officers. Troops even attacked their own officers. When Nixon won the presidential electron he began his policy of “Vietnamisation” and started to reduce the number of U.S. troops. Meanwhile massive anti-war demonstrations continued. These were fuelled by happenings like those which took place in the tiny Vietnamese village of My Lai in 1968. The killings sickened and became powerful arguments for the anti-war protesters. Newspapers and magazines also fuelled anti-war propaganda. In June 1966 a three page ad was placed in the New York Times signed by 6400 academics. Also “Life Magazine” took the decision to fill one edition of its magazine with photographs of the 242 U.S. soldiers killed in Vietnam in one week.